Screenshot of the Facebook Adverts aimed to pop up on timelines of the target audience. I knew I wanted to incorporate the Welsh language into my designs so as to directly target those in South Wales, so all translations had to be checked over by people living in the region. 'Dwi'n chwarae' translates to 'I play'. I think the combination of the languages works really effectively in promoting the sport as a Welsh sport.

Having conducted research into stigmas, I found that one of the biggest stigmas surrounding the sport was the idea that all the women were masculine and aggressive. This was a difficult stigma to try and tackle, however I identified hair-care as a potential touchpoint for the campaign. I didn't want the design of the scrunchies to be too obnoxious and deter girls from wanting to use them, and so instead chose to do a polka-dot pattern on two of the designs, using the logo as the polka-dot itself. On the lighter pink scrunchie, however, I did choose to use the hashtag of the campaign #TryAndStopUs, to accommodate those who wanted to showcase their support of the campaign.

With Instagram and Snapchat filters being on of my target demographics favourite aspects of social media, I chose to use filters as one of my touchpoints. Initially I explored creating one filter that generalised the campaign, however, I decided that it would be more fun and interactive if it was a filter that gave each user a randomised position. These filters are hugely popular on Instagram in particular at the moment, and therefore I think the amount of usage of a personalised filter would be hugely greater to that of a generalised filter. 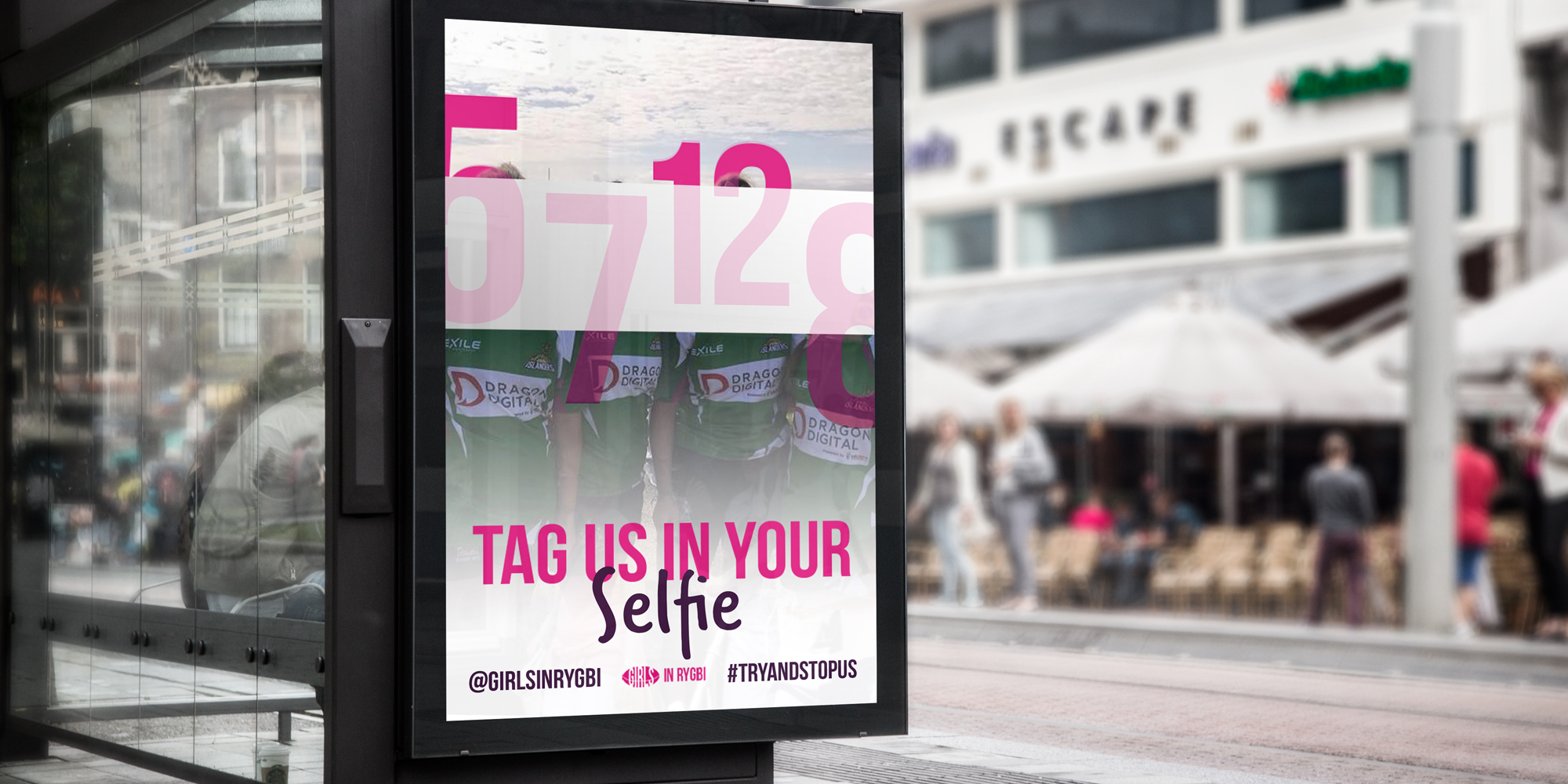 As the campaign targets girls at secondary school, I thought a good idea would be to create an interactive touchpoint at a place visited daily. The bus stop has a mirror in place of the faces of those in the original photograph, used in the design, which allows for passersby to take a selfie of themselves as the rugby players. The design promotes the hashtag of #TryAndStopUs and tagging, so that all the selfies can be linked to the campaigns social media. Having this would allow the girls to find other photos from other rugby players, and the mirror would show the girls how they would look as rugby players, something they may have never considered before.

I wanted Littlerature to encourage people to pick up books, and thought the best incentive for that would be to give out book tokens which could be redeemed at stores such as WHSmith and Waterstones, or even at book fairs in schools. The design of the book tokens needed to appeal to children, so that they would be drawn to them, however the pamphlets and other merchandise of the brand would need to appeal to parents, who had influence over their children's actions. I feel I managed a happy balance between the two, which was continued throughout my other outcomes.

I wanted to reach out to both parents and children with this campaign, which brought about a few challenges. This touchpoint needed to be bright in order to catch the attention of the passersby and draw them in. Using a pattern throughout the campaign helped add a level of cohesion and therefore increased the chance of recognisability, which is something I was very happy with. The hand-drawn illustrations reflect those you could expect to find in a children's book, which is perfect when campaigning for children's literature.

These touchpoints are more so aimed at the children directly. I realised that there needed to be a motive for the children to change their habits, and remembered what I liked as rewards as a child. Stickers and new stationery at school are something that children love as a way of personalisation, and so I deemed these very appropriate to use when trying to motivate new habits among my younger audience. I think they match the brand really well and are bright and bold enough to work as great advertisement.

These designs were created with the motive of reminding adults about their favourite books from when they were younger. Research showed me that it is only this new generation in particular who aren't reading books anymore, instead being given technology, and so I knew that the parents I was targeting would likely be familiar with these famous quotes from popular children's books. By evoking happiness and fond memories of favourite characters, quotes and books, 'Littlerature' manages to pull at the heart strings of its target demographic.

I share a love of rugby with my friends and family, many of whom live in Wales, hence my decision to focus on Welsh Rugby. I decided to create a campaign called Girls in Rygbi to encourage girls to get involved in the sport of rugby as research has shown that whilst the majority of young girls starting at secondary school would enjoy playing the stereotypically 'masculine' sports in P.E. lessons such as football and rugby, they are not being given the opportunity to do so. Instead, they are introduced to sports like dance and netball. Many people are under the impression that all female rugby players are 'butch' and 'aggressive', which Girls in Rygbi aims to combat.

Whilst at Loughborough University in my second year of study I found a passion for campaigns through my involvement with the Executive Officer elections where I was the Social Media Director & Graphic Designer for an officer who went on to win. I decided to build on this enjoyable experience by developing 'Littlerature', a campaign that encouraged parents to promote leisurely reading to their children. Too often nowadays, children are being handed screens in lieu of books, as a method of distraction by parents, despite the many benefits that reading offers. It seems a shame that the number of children reading has dramatically diminished. 'Littlerature' aims to remind parents of all the benefits and fun that can be had from reading books, by using fun quotes and illustrations.

During my year in industry I moved to & lived in London. In order to succeed & get the excellent feedback I received I had to be well organised, work well in a team & have attention to detail. I am able to identify problems and come up with effective solutions by explaining my reasonings clearly and concisely, and using available resources. These skills, I am sure, will be hugely valuable as I move on to work within the industry.

'20 Diploma in Professional Studies
'18 Stash Representative of the Year :
From February 2017 - March 2018 I was in charge of designing the clothing and promotional items that represented Harry French Hall. As part of this role I had to design new and desirable designs that could be transferred onto whatever item I so deemed fit. I worked with different companies in this process, and had to ensure that what I sent to them was formatted both correctly and clearly. I was awarded Stash Representative of the Year by the Stash Chair because of my innovative designs and organisation.

As well as my year in industry, I have also completed week-long work experience in the following settings:

Field Photographic (Photography Business)
I spent a week at Field Photographic. During this time I assisted a photographer at a wedding and at Slimming World Man of Year 2012. I was shown how to compile albums and how to best edit the photos, using Adobe Photoshop, so that they looked the best they possibly could.

Fluid Design (Graphic Design Agency)
I completed a week’s worth of work experience at Fluid Design, learning how to use different Adobe softwares including Photoshop and Illustrator on Apple Technology. I was given an insight into the process that is involved when creating fonts, and when designing logos.

5ive (Product Design & Marketing)
I completed one weeks experience at 5ive, a company that looked at the fashion markets, designing specifically bags and accessories for major brands such as Topshop. I learned how companies such as 5ive use Adobe Illustrator when designing products for retail.

Stimulating Minds (Graphic Design Agency)
I spent a week working alongside a team of graphic designers. I was allowed to come up with my own ideas for live briefs, which involved designing wire frames and photoshop drawings of websites that met the customers wishes. This work experience placement gave me more of an insight into rebranding, which challenged me to come up with innovative designs whilst faced with restrictions.

The Design & Make Bus (Independent 3D Designer)
During a weeks work experience I was shown the process behind creating a physical product through working with equipment such as strip heaters and 3D printers.