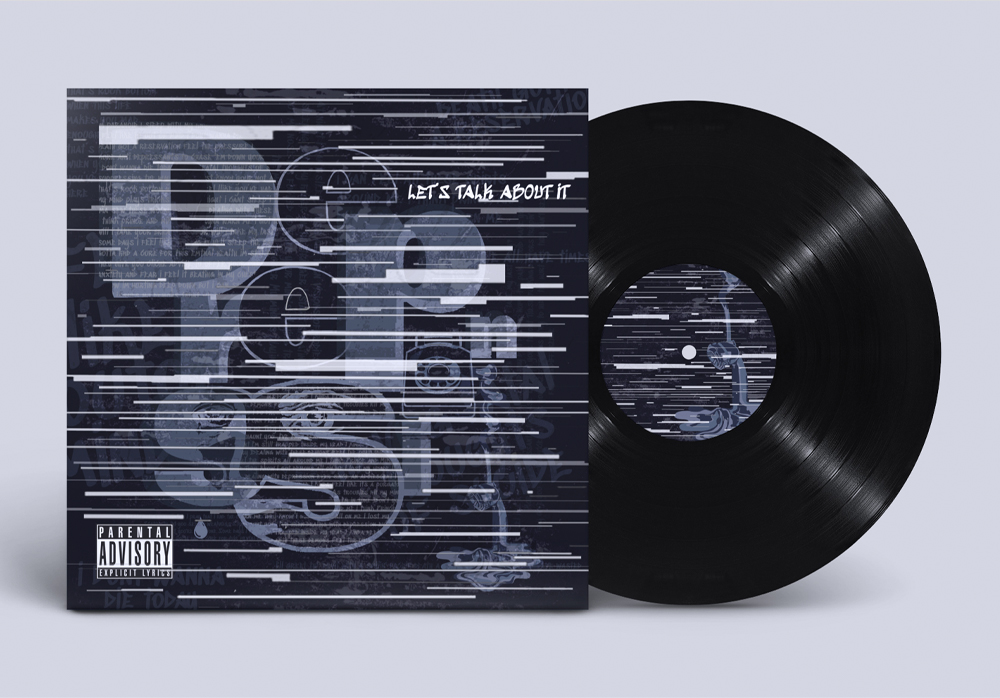 The empowerment of music (depression) - front cover of vinyl album

Designed to represent a cause using a musical movement, genre or song, this competition project from D&AD focuses on raising awareness around mental health in particular depression, through the use of typography. It particularly focuses on targeting those that feel they are not to speak out about their mental health such as young males aged 18-24. Although it is described as a taboo subject, mental health is increasingly becoming a common subject talk about particularly through hip hop music, and as shown by research can be used as a form of therapy to help cope with certain situations. To help continue to raise awareness and provide a call to action, I had created a hip hop vinyl album that features a collection of mental health related songs written by artists who have experienced mental health issues themselves, that would enable the listener to relate to the artist and use as an alternative form of therapy.

The structure of the design has been formed so that the letters blend into one and another with some of the letters being replaced with imagery. The sad eyes used to create the shape of the s’s was deliberately designed to represent the emotional effects of depression. Whilst the retro telephone box used to create the letter o with the phone hanging down, was used to represent a hotline that had been used several times to provide help for those in need causing it to melt. Lyrics to each of the songs selected have been featured in the letter D, which has been overlaid with a shadow along with the other letters to create the impression of ‘wearing a mask’ to cover up emotional feelings and thoughts. 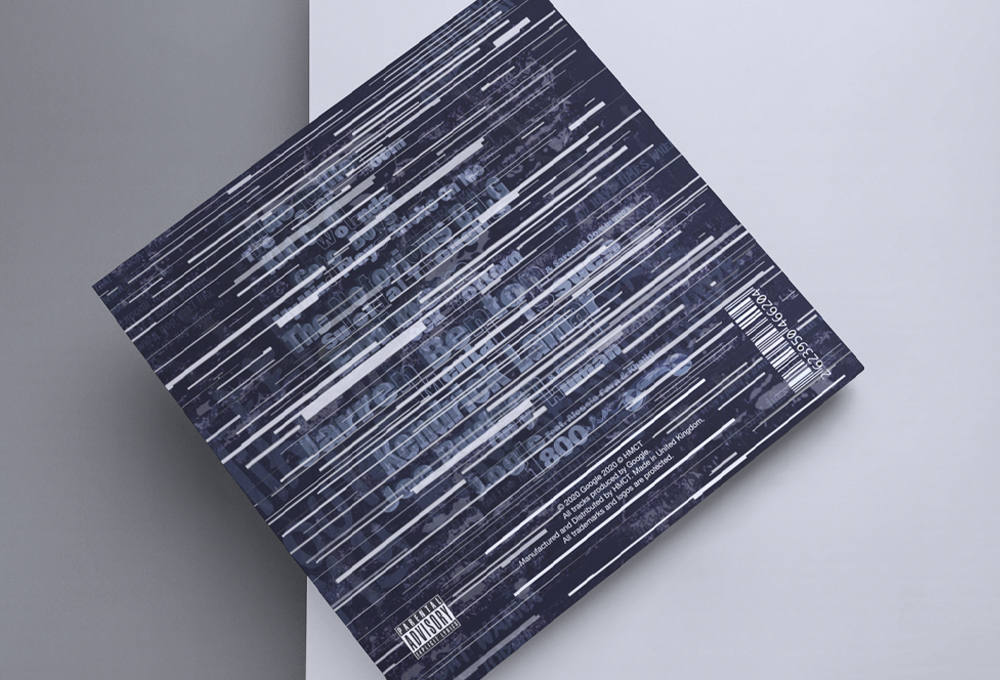 The empowerment of music (depression) - back cover of vinyl album

The above image displays the back of the hip hop vinyl album featuring 9 songs that talk about mental health. Each of the songs have been selected from artists that have suffered or are going through mental health in particular depression that talk about their experiences through their lyrics, which would enable the listener to relate to and feel like they’re not alone.

The glitching effect displayed across both the front and back cover of the vinyl was deliberately designed to play on the idea of its representation and visually convey that some elements of depression such as its symptoms are visible and some are hidden. Letters from the artists names and song titles have been blended into one and another, which again have been overlaid with a shadow to create the representation of ‘wearing a mask’. 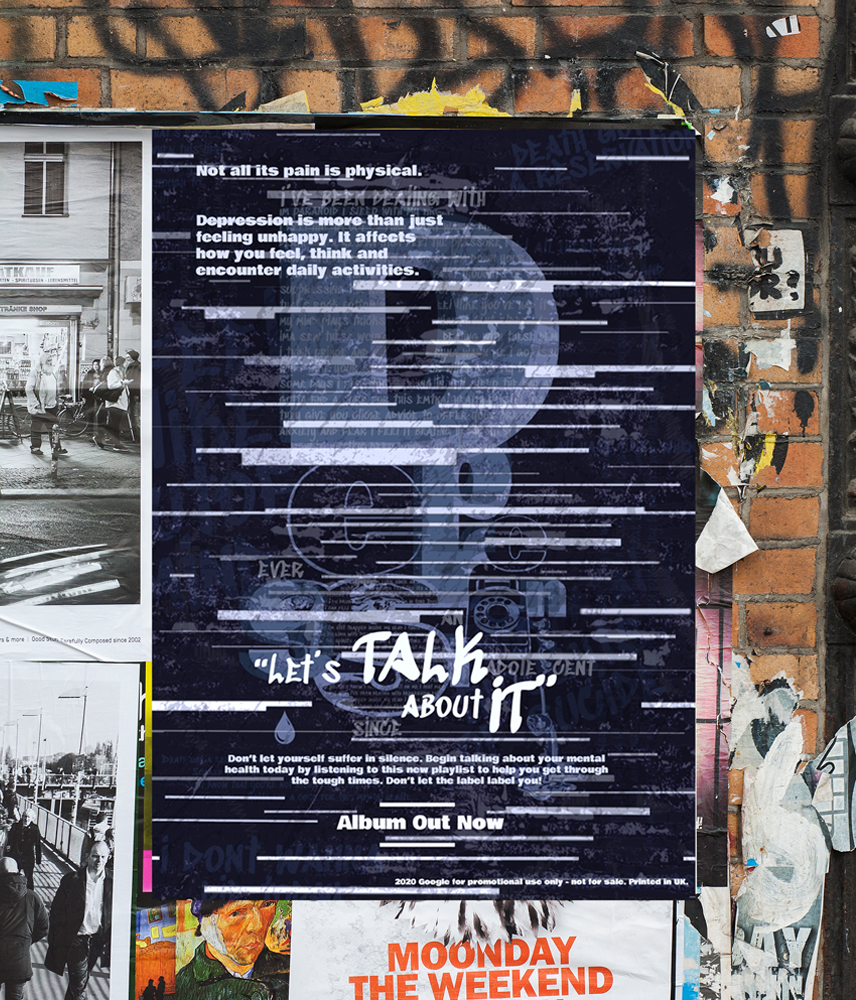 This poster was designed to advertise and promote the hip hop vinyl album, again providing a call to suggest that there is another form of therapy out there.

The design deliberately uses a similar design to the front vinyl cover, which has been enhanced using the lyrics ‘I’ve been dealing with…. Ever since an adolescent’ to the Kendrick Lamar Song ‘I’, making the poster seem more personable to the reader. Lyrics taken from the featured songs have been arranged subtly in the background to visually represents emotions and thoughts that a depressed person may experience. (This can also displayed on the front and back of the vinyl). 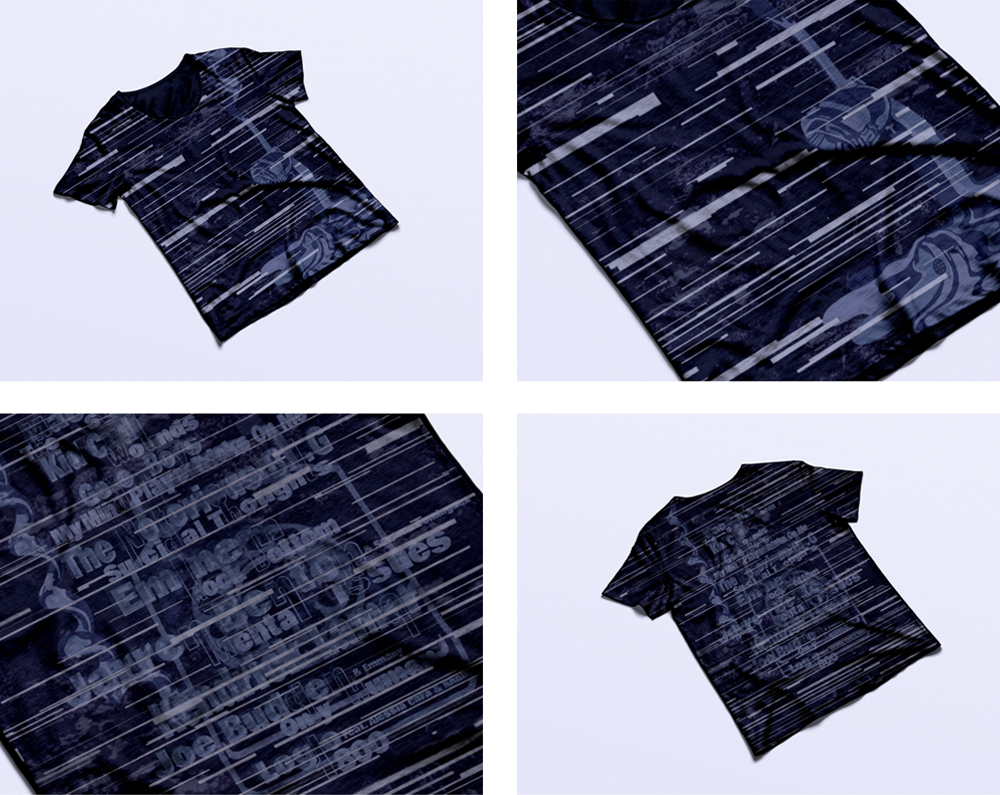 T-shirts have been designed to help subtly raise awareness and provide a message about depression using only the melted telephone and telephone box, which has been arranged in a format so that it hangs over the shoulder as if someone was wearing it. Glitching has again been used to play on the idea of the controversy between things being hidden and not hidden. 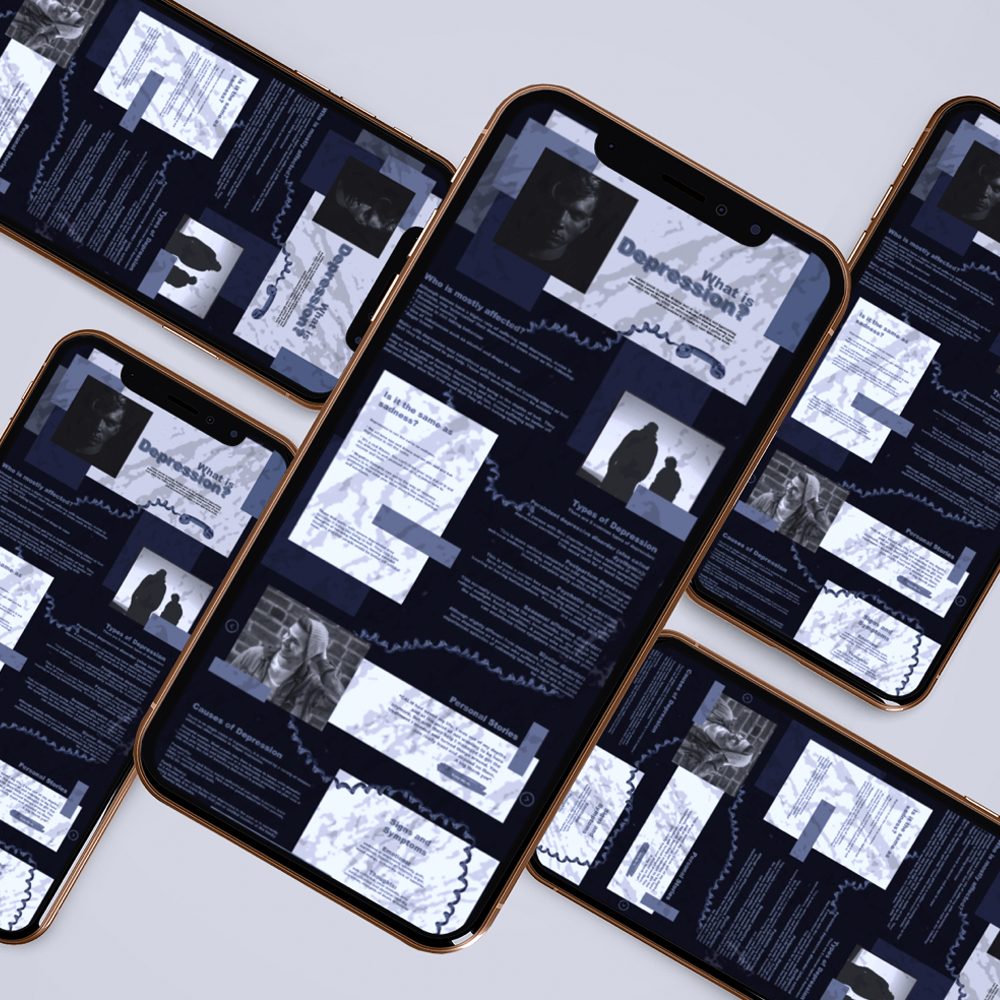 As part of the campaign, I had produced a webpage providing extra details about depression, its causes, treatment options and how they can access the vinyl. It’s design and structure deliberately uses a simple layout, with the melted telephone interwinds throughout the pages so that users can easily navigate their way around the pages. 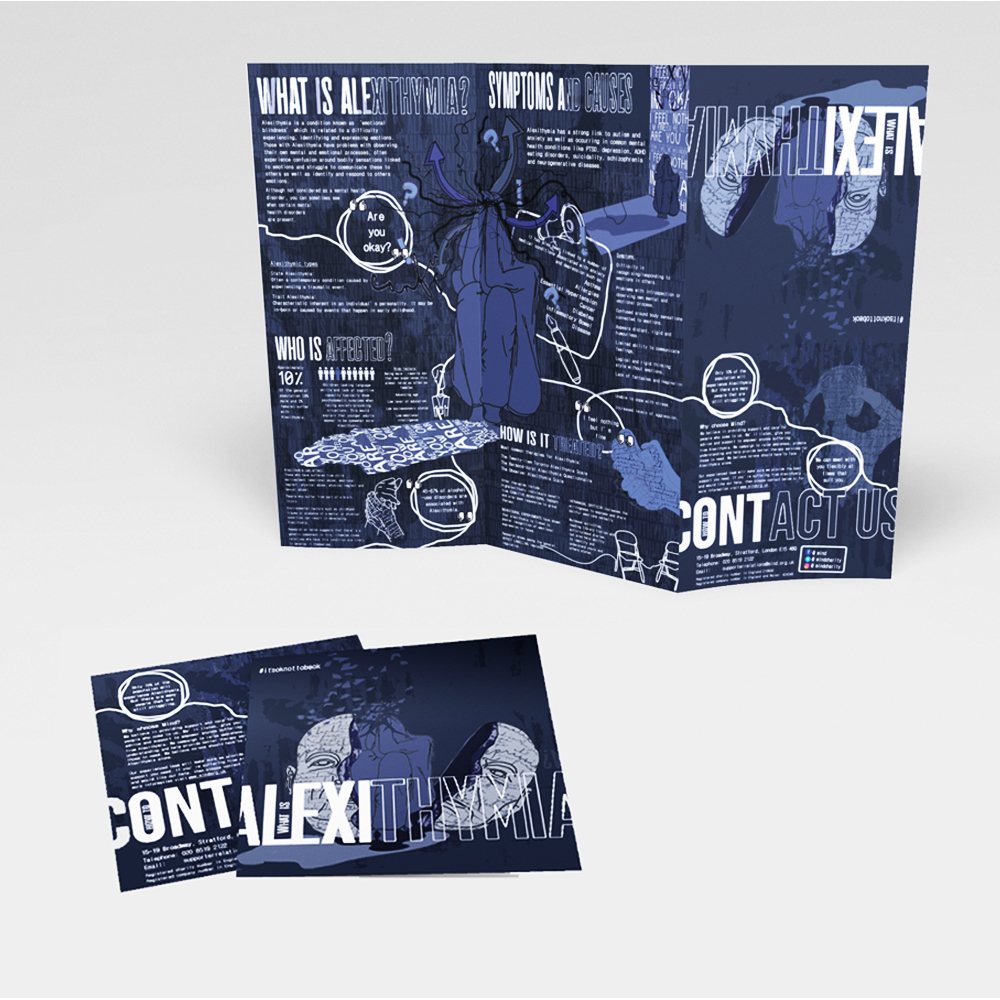 Out of place - Alexithymia leaflet

The above project was designed to represent and raise awareness around a particular topic that is ‘out of place’, in this case Alexithymia. Known as an ‘emotional blindness’, Alexithymia is a condition related to the difficulty of experiencing, identifying and expressing emotions both in yourself and others. Affecting approximately 10% of the population, the project focuses on targeting young males aged 16-24 who make up at least 8% of this figure. To help create awareness about the unheard medical condition, I had produced a double sided leaflet that provided detailed information about Alexithymia, its treatment and contact information options one side, and a poster the other side.

The leaflet has deliberately been designed this way so that when folded, it is pocket size, making it easier for individuals to carry and hold. The illustration of the individual hunched over in the centre of the leaflet, has been deliberately designed to describe how an individual with this condition would feel visually. This is further enhanced by the surrounding illustrations which have been designed with written typography as ‘labels’ to represent the emotional impact of what the person actually feels i.e. nothing and how the person should be feeling. The style of the leaflet has been arranged to provide the reader with enough information, making it easier to read and suitable to display in locations such as a doctor’s surgery, counselling or therapy room. 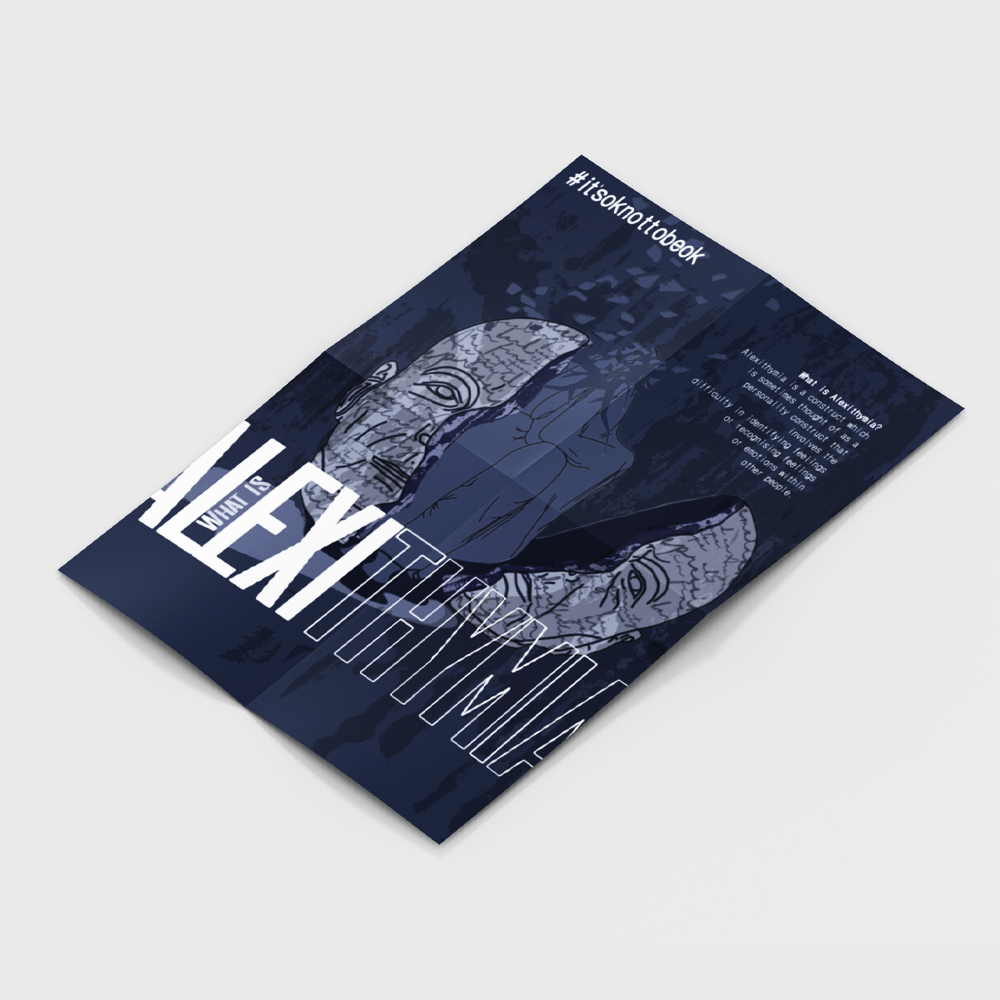 Out of place - Alexithymia poster

On the other side of the leaflet, there is a poster which briefly describes what Alexithymia is, and features a similar illustration to the front cover of the leaflet. This has been deliberately designed so that it helps create continuity, and so that the poster is simple and clear to read. A hashtag #it’soknottobeok has been designed to help spread the message across social media platforms which will help create more awareness around Alexithymia. This has been applied to both the poster and the front cover of the leaflet. 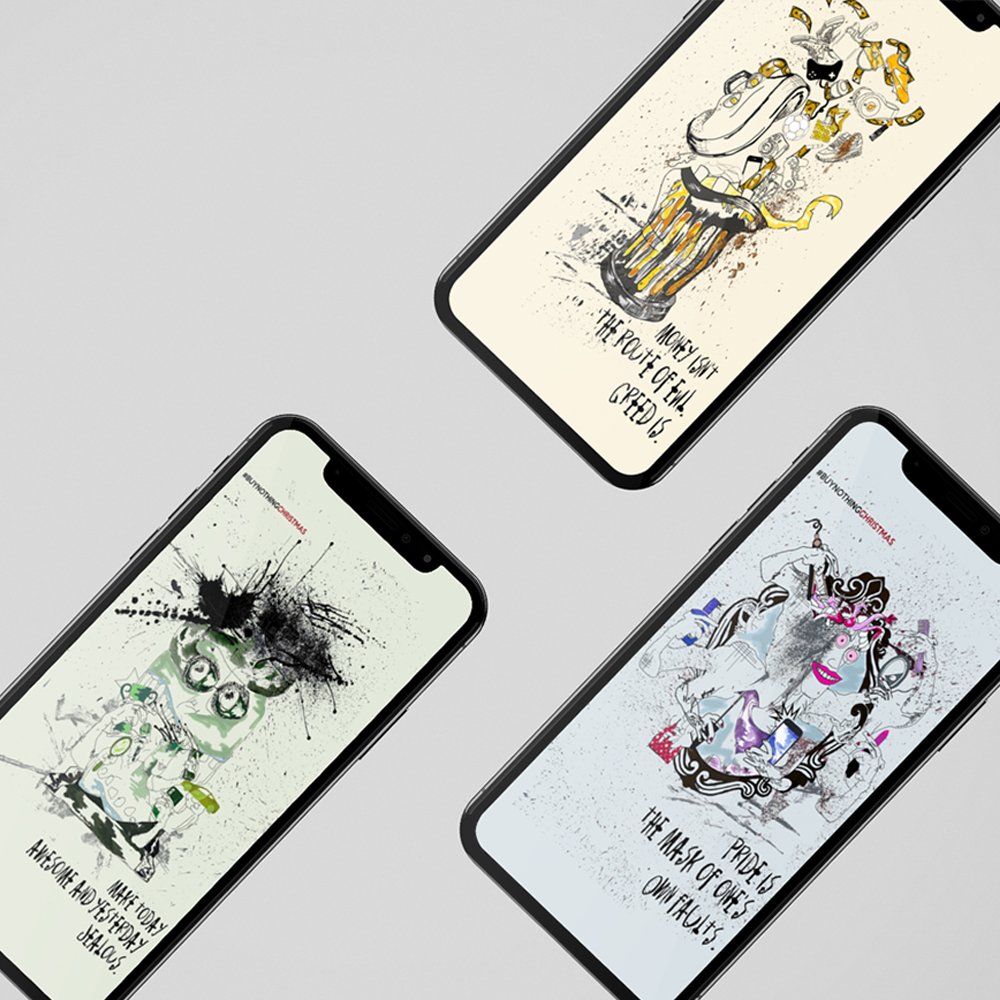 This project displays a series of posters, designed as a social media campaign to analyse the impact of materialism by applying the seven deadly sins. The aim of this project was to encourage young children aged 12 to stop buying and/or collecting materialistic objects that they don’t necessarily need for a week particularly around Christmas and using social media platforms to document their process with the following hashtag #buynothingforchristmas, and compete against others to win a prize. The posters deliberately use 3 of the seven deadly sins; greed, envy and vanity which were the most common and appropriate stereotypes to visually describe materialism.

The greed poster has been designed using a trash can, swallowing materialistic items to play on the idea of buying ‘trash’ (the things you don’t necessarily need), reinforced by the yellow colour scheme used to represent luxury and gold. The envy poster has been designed in a similar way using a character and using wide eyes to create the representation of jealousy, reinforced by the use of green. The character displayed on the vanity poster has been designed inside a mirror to create the representation of pride and confidence which is further enhanced by the blue background colour. Key elements such as the enlarged lips help to contrast this idea by play on the subject of looking unrealistic and that too much beauty can make you look ugly. Each poster features a short caption, encouraging the children to reconsider their actions suggesting that they don’t need these things to be popular.

My strong creative flair has shown that I have developed a passion for advertising and publishing, with a particular interest in promotional advertising and literature designed to promote, entertain, raise awareness and interact to help fulfil a client’s needs.

Throughout my degree, it has highlighted that my key strength is communicating visually and verbally through the use of advertising and publishing across art, technology and social media. I particularly enjoy using my creative flair to design thought provoking images that create an impact, utilising my current knowledge to help develop my innovative skills further. With this in mind, I had decided to create 3 advertising campaign projects; one raising awareness and providing a call to action about depression through the use of music, one raising awareness about an unheard medical condition (Alexithymia) and one analysing the impact of materialism on 12 year olds by applying the seven deadly sins.

After completing these projects, I have also developed strong skills in the following; digital illustration, social media marketing, editorial design, advertising and branding such as the Alexithymia leaflet and poster, the t-shirt design for depression and the 3 social media posters displaying materialism. I have developed specific technical skills in the Adobe Suite like Photoshop, Illustrator and InDesign and particularly enjoy taking on new challenges such as undertaking a typography based project for example the depression vinyl album and developing other skills such as web design. I have also been able to effectively plan and organise my projects, researching around the topic, understanding why it needs to be designed and what the purpose of the project is. In addition, I have also improved my time management skills to ensure I had delivered the projects on time. After I graduate, I would like to pursue a career in graphic design, preferably in the entertainment industry. My ultimate ambition is to progress up to a Creative Director.

As part of my placement I had undertook during 2018-19 at GamesAid, I was required to complete an assignment that demonstrated my understanding of the company I had worked for, my experience of working in a particular industry and the types of roles and challenges I had overcome. Awarded with a pass, I had received a 2020 Diploma in Professional Studies. This will be received alongside my graduation certification in July 2020, and will be kindly awarded by the School of the Arts.

Between 2015-16, I had completed a foundation diploma in Art & Design at Loughborough University, which enabled me to investigate and explore my skills, techniques and different processes across 4 specialisms; Graphic Design, Textiles, 3D Design and Fine Art. Awarded with a distinction, I had therefore received a National Diploma in Art & Design Foundation Studies. This was received in August 2016 and kindly awarded by the School of the Arts.