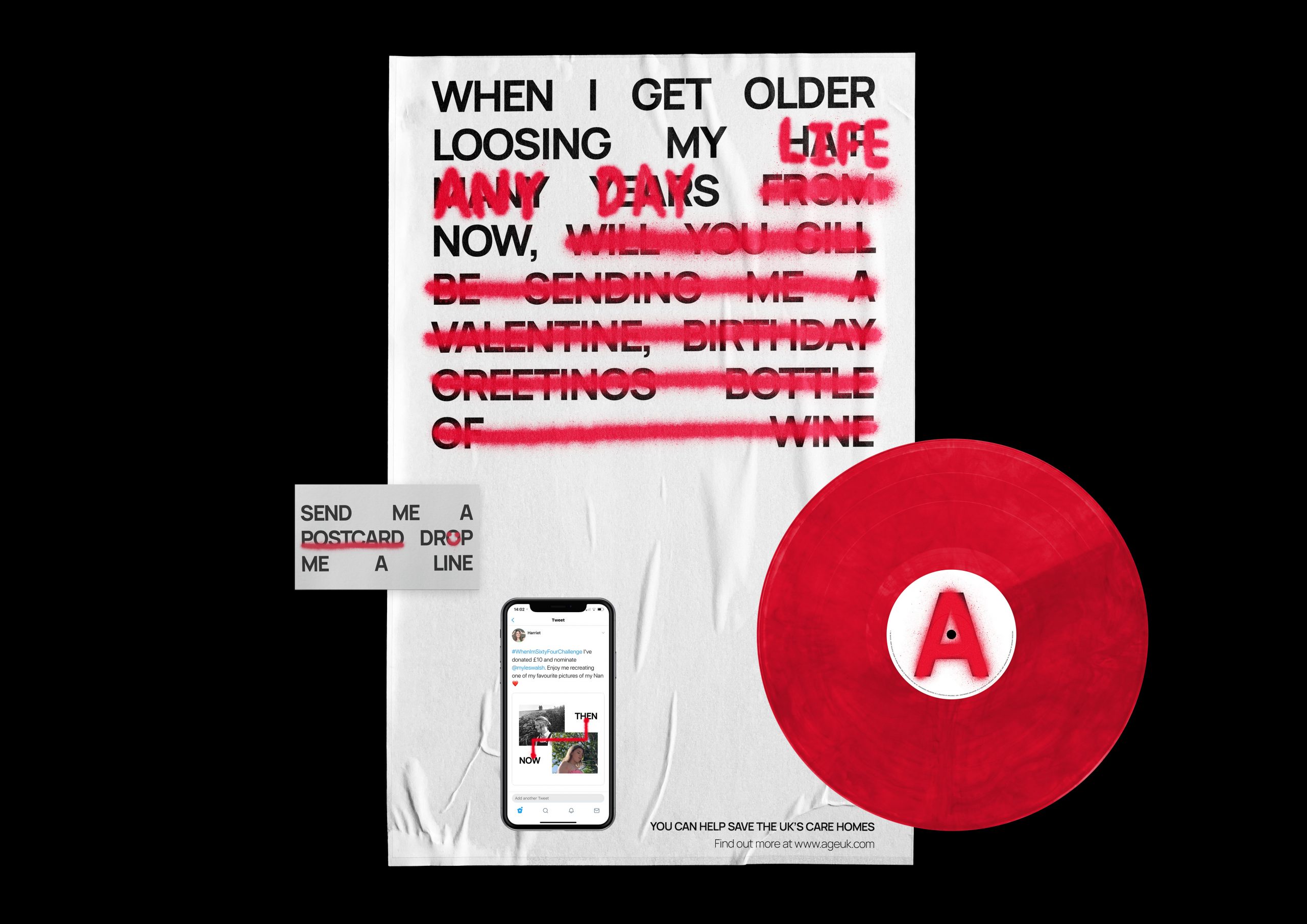 With its visuals, the campaign puts all the focus on the deconstruction of the lyrical content of the song; contrasting together the modernist Google typeface ‘Manrope’ with handwritten elements to convey the illusion of underlining messages within different lines of the song. This typographic device is carried over to all of the outputs within the campaign, making for outcomes that work both on their own and cohesively as a collective force. 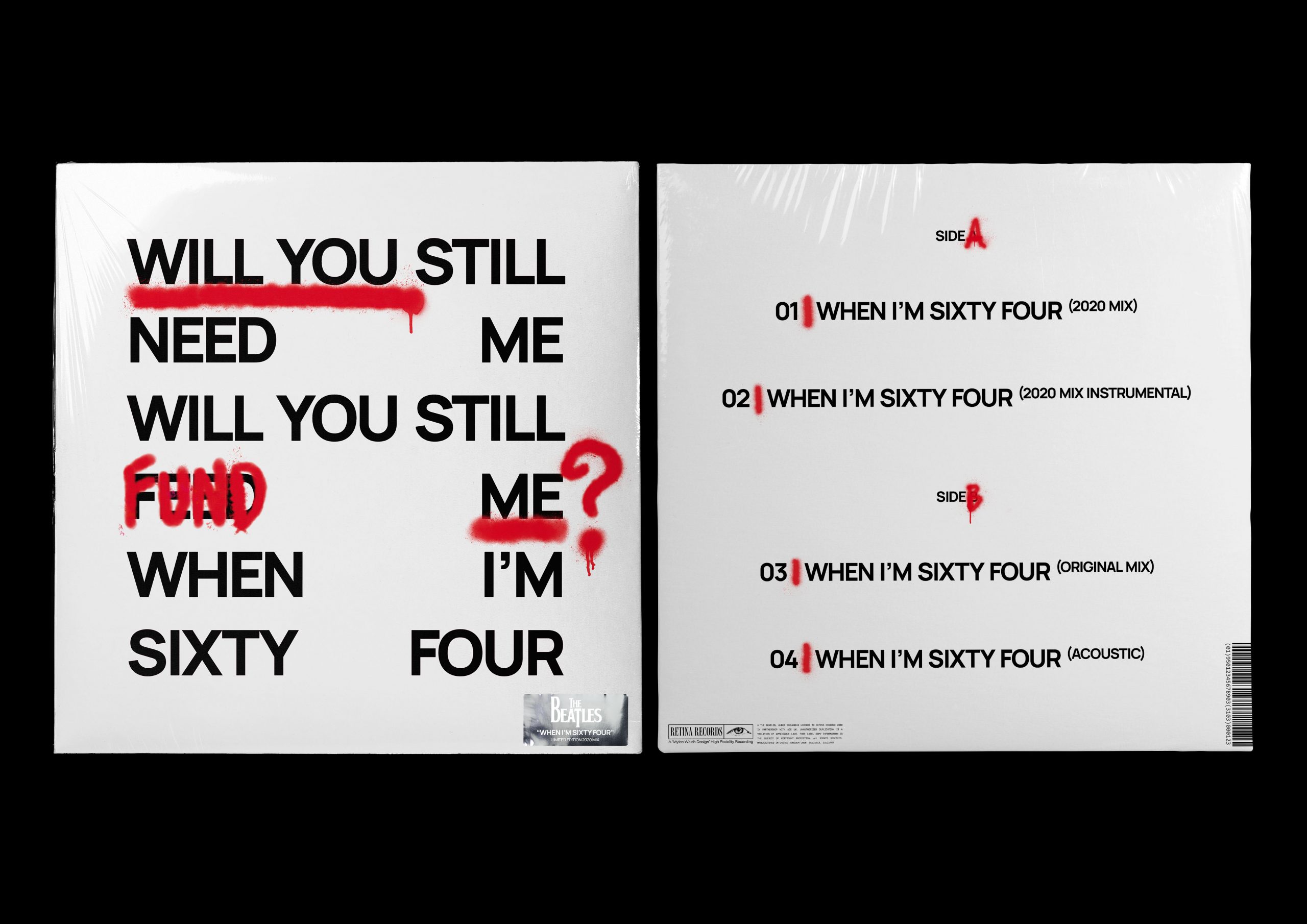 The product enables the consumer to feel that they are helping society, combatting the feeling of helplessness common in lockdown, by having the profits from the record sales going directly to Age UK. Additionally, the limited time-frame of the vinyl’s production makes it a collectors item, allowing the audience to feel that they have their own piece of history (which in future can increase in value). 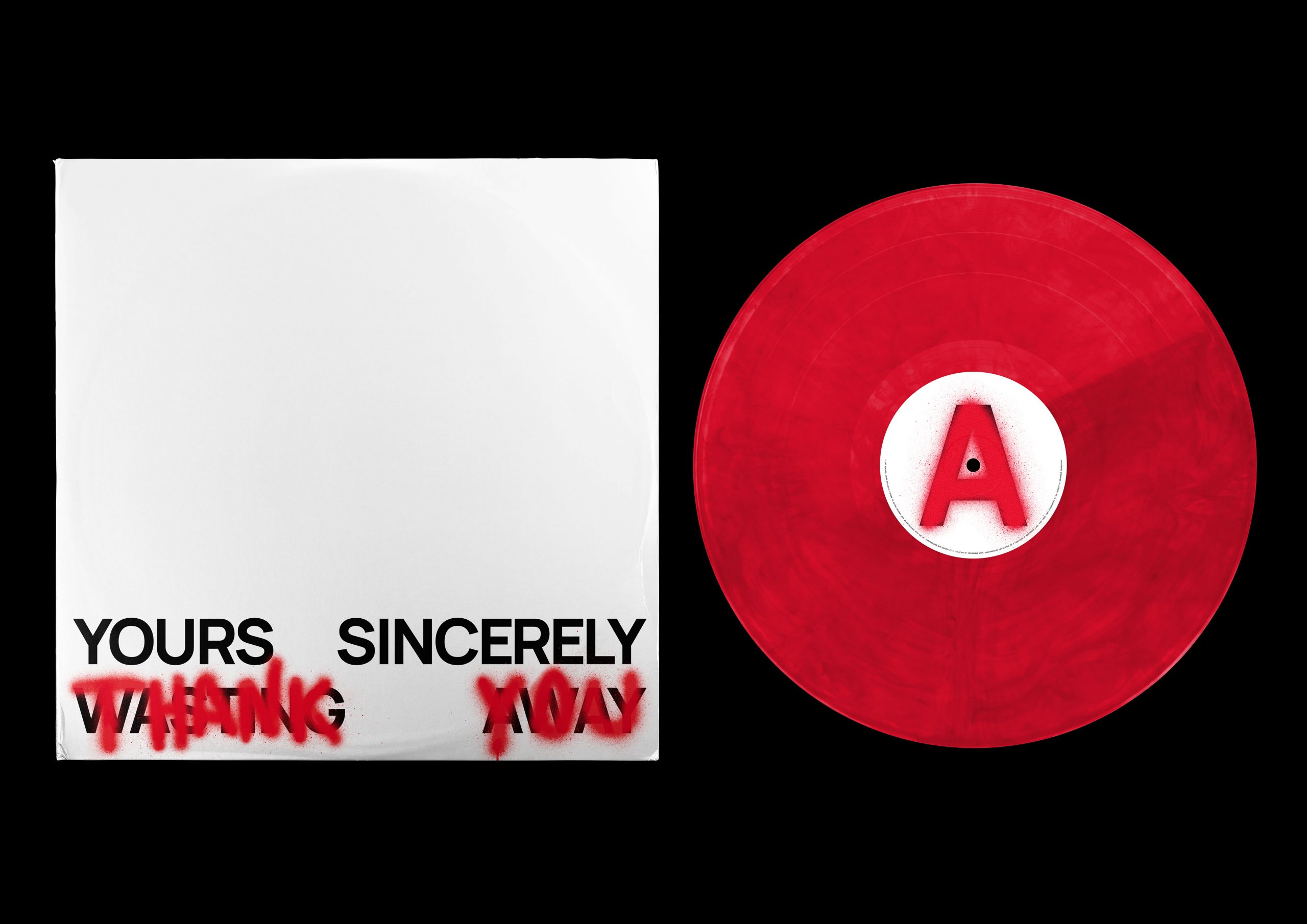 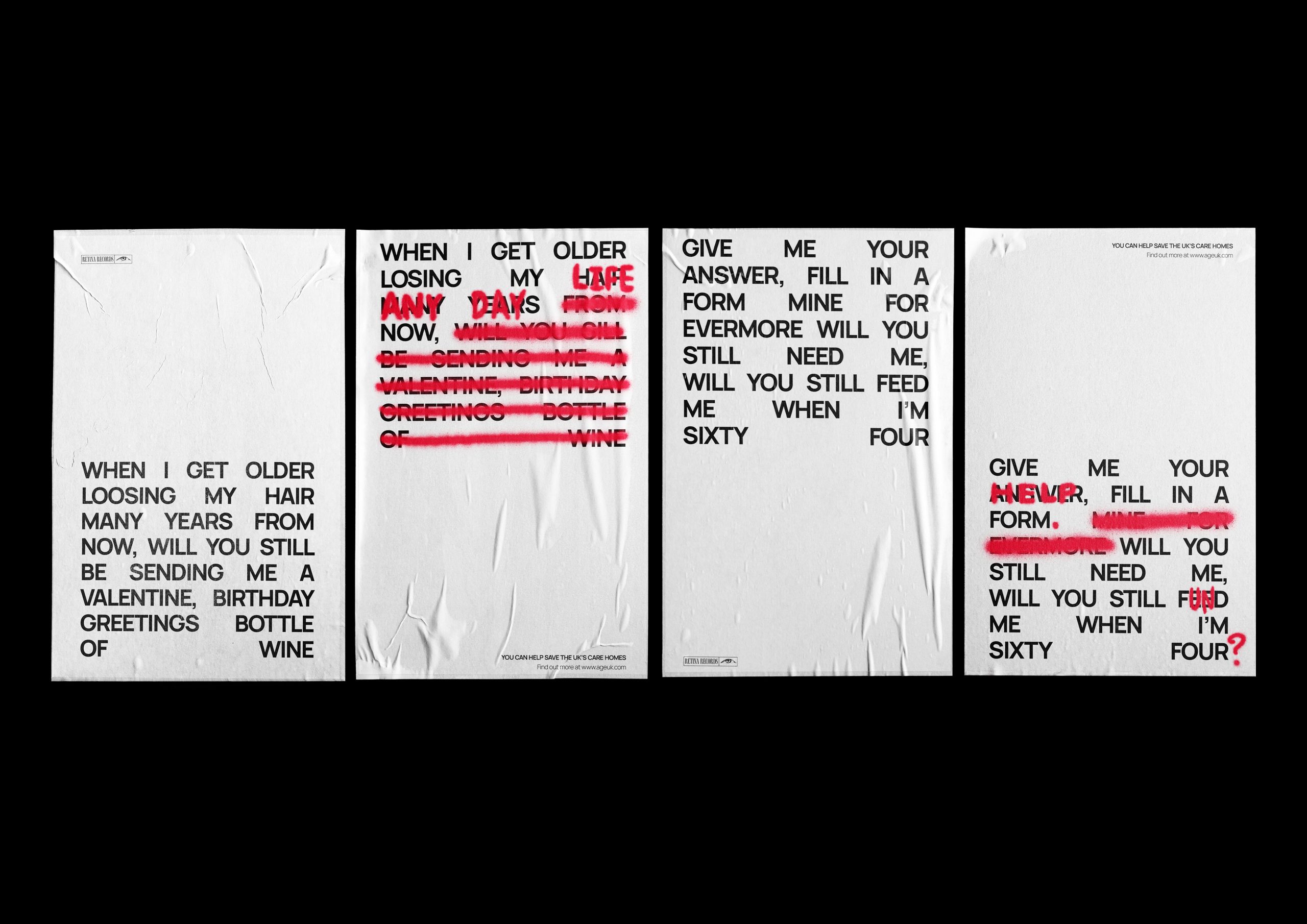 The posters operate in pairs creating a parallel between them using the additional handwritten graffiti type to portray a feeling of disparity between reality and truth through typography. This allows the campaign to stand out during the audiences limited time outside, especially when the series of posters are paired together. 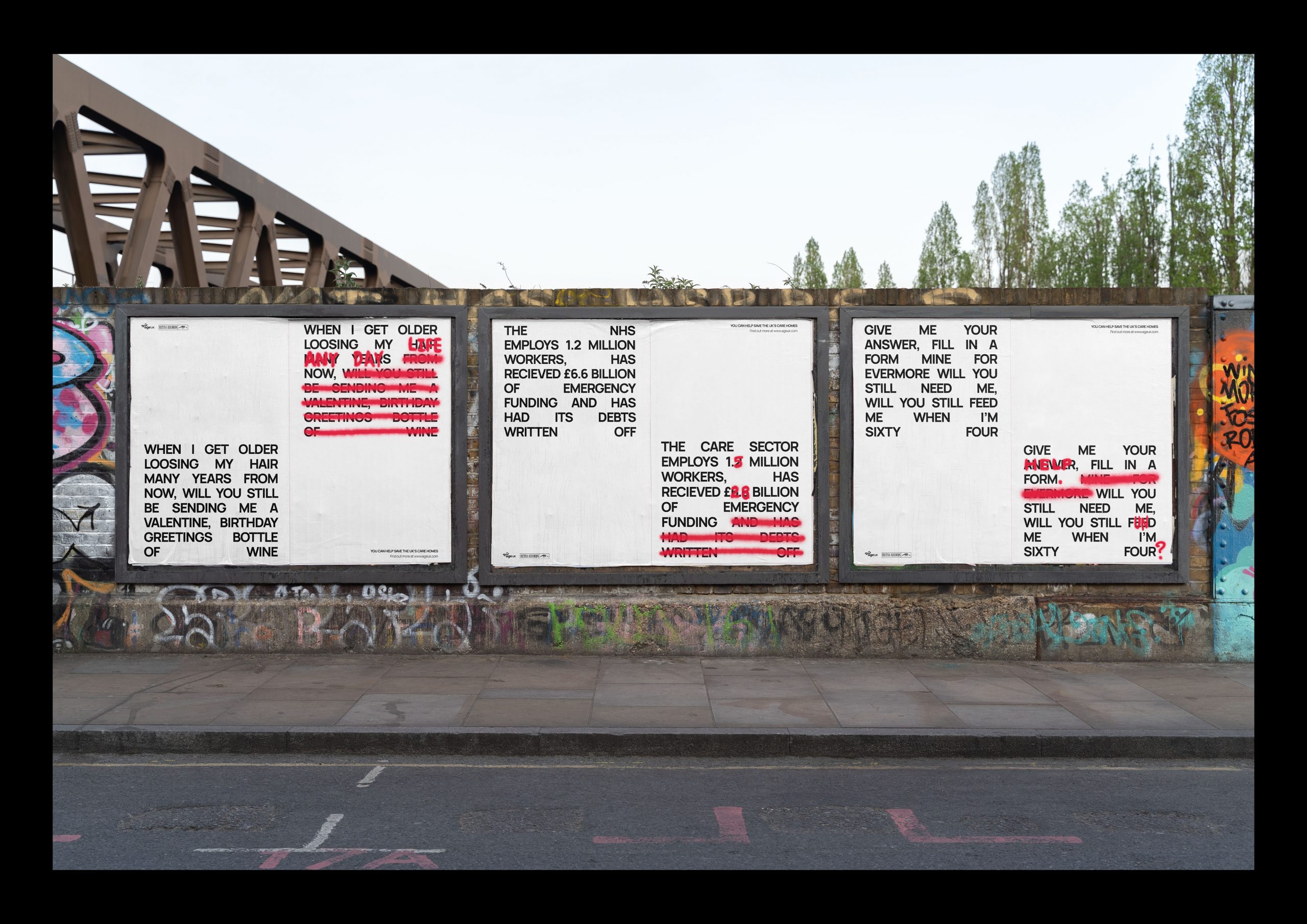 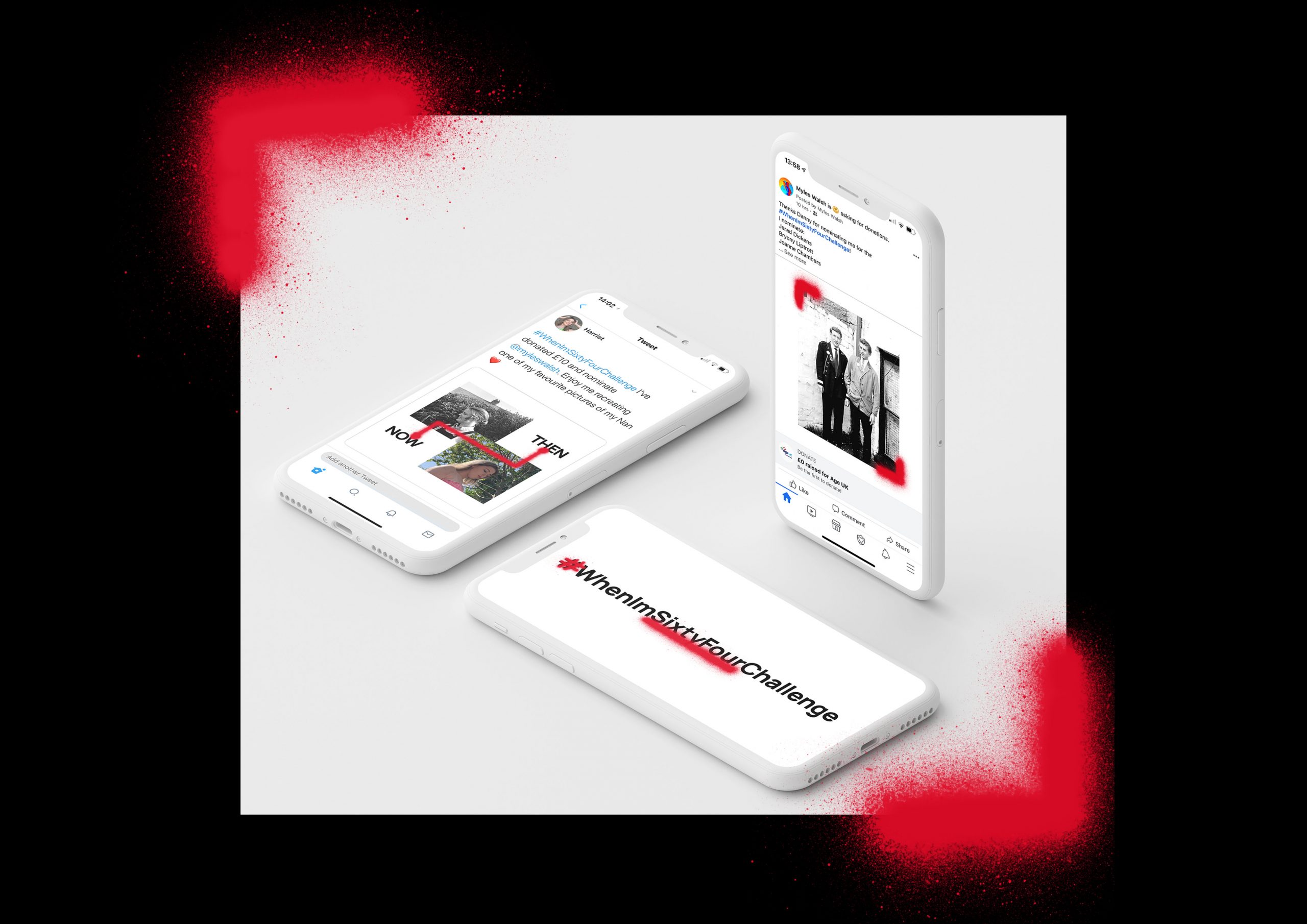 With the world in lockdown social media has become an even more integral part of our lives, being one of the only ways where we can connect with people. The #WhenImSixtyFourChallenge plays on that aspect with a viral challenge encouraging people to donate to Age UK, nominate their friends and then share or recreate a picture of their parents/grandparents when they were younger. Allowing people to actively engage with the campaign whilst continually raising awareness. 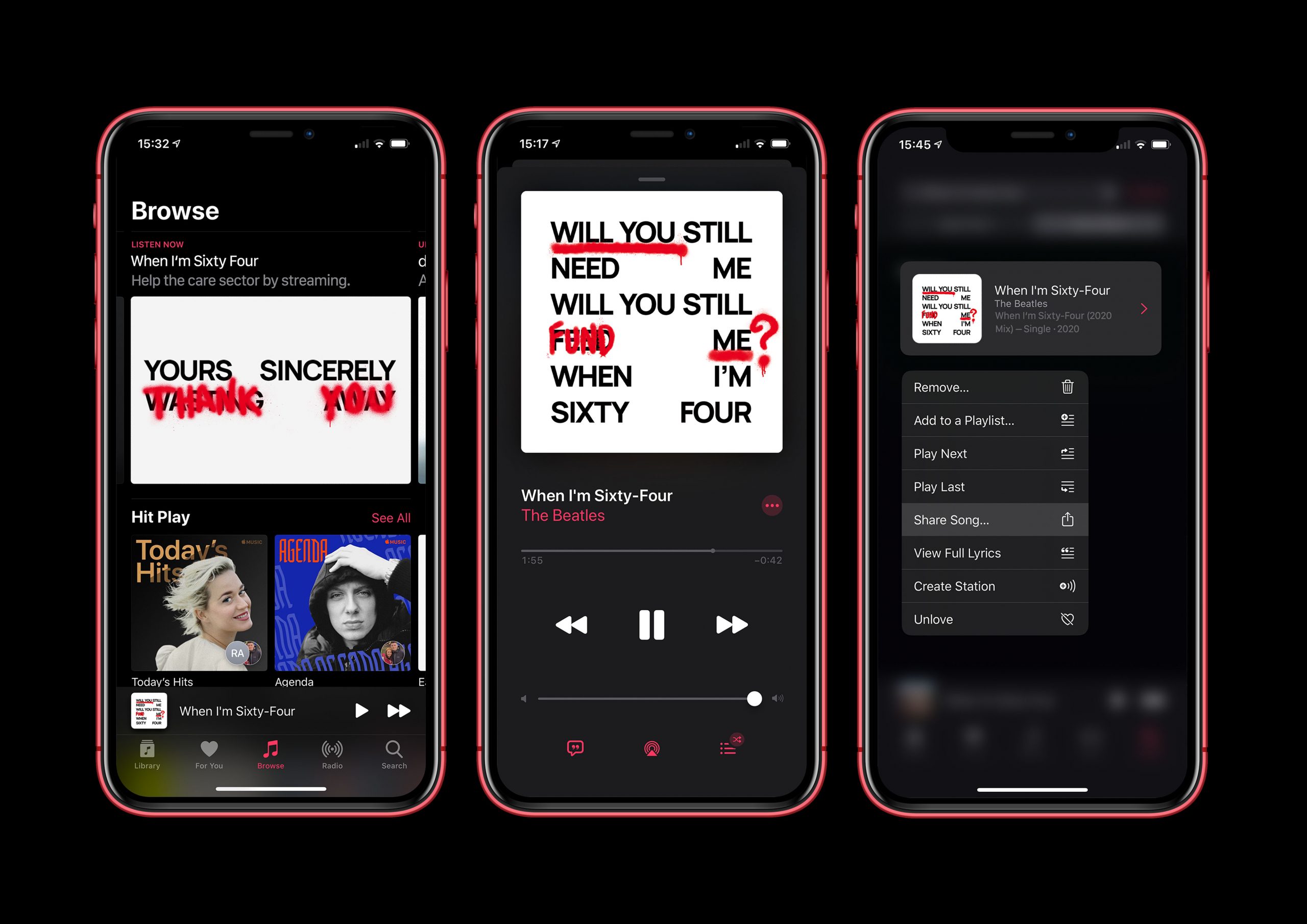 The revised version of the single will be made available digitally, where all the profits from purchasing and streaming will go straight to the Age UK fund. This creates a constant flow of funding into the the project, whilst also allowing the audience to be more active in their interaction with the campaign. 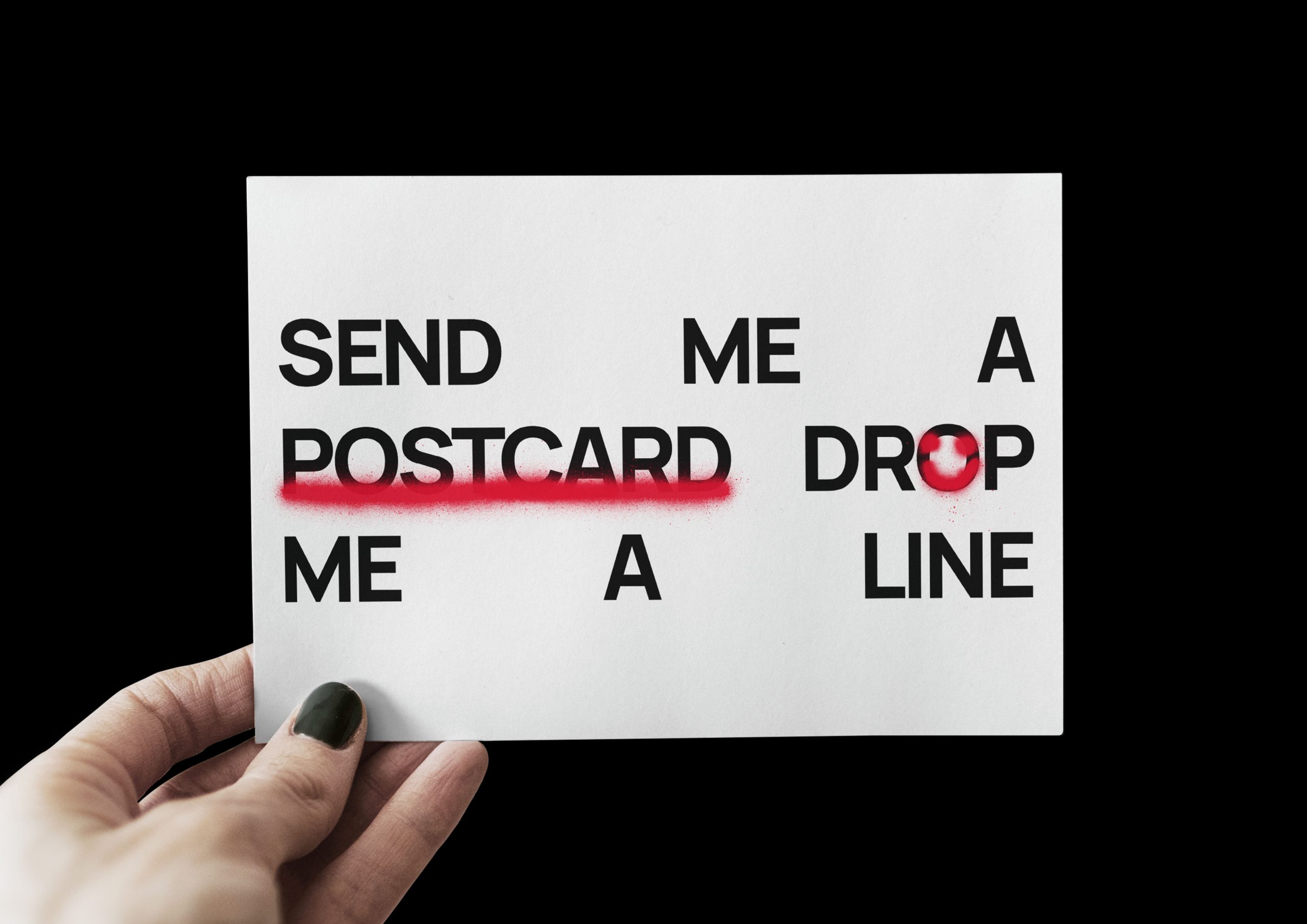 Like the vinyl, the postcards are a tangible product that people purchase to aid Age UK, whilst also working to help connect people in a more meaningful and non-digitised format.

A typography lead campaign that uses the power of music to help raise money and bring attention to the underfunding of care homes in the UK.

I’m a multi-disciplined graphic designer from Liverpool, who loves bringing new interesting perspectives to help solve problems through design. Within all of my projects, I like to utilise strong design choices and combine them with diegetic textures to create visual languages that don’t just elevate the material but are also distinct to me.

The project I am showcasing was completed as an entry for the D&AD's New Bloods Awards, where I utilised the lyrics of The Beatles song 'When I'm Sixty Four' to lead a typographic campaign - centred around the underfunding of care homes in a post COVID-19 environment. The aim of the campaign is to not just raise awareness to this issue but use the outputs to help generate funding for Age UK to combat the problem directly. With up to half of corona virus related deaths in Europe are occurring in care homes, I chose to showcase this project in particular as I believe it carries an extremely important message and social relevance. Furthermore, I believe it is a great vessel for showcasing my unique visual language, using strong clean graphical elements and combining that with a layer of grit and texture to create something that is visually striking.

If you like to see any more projects or want to work together please visit my website or get in touch using the details provided.

I successfully ran and was elected as the media representative for Robert Bakewell Hall at Loughborough University. Whilst I was in the role I did a lot to update the visual identity in terms of the brand and revamp the social media for the hall, which saw the hall move from seventh to second place within the Hall Media Leaderboard in just four months.

'17 'Outstanding Achievements in Graphic Design Award' from Carmel College, which I was awarded for receiving the highest A-Level results out of the entire college.

Between my second and final year of university I interned at T34 Design in Liverpool throughout the summer. During my time at the studio I had an active role and creative input in a range of projects including: re-designing websites, artwork making and branding. I also got to sit in on client meetings, gaining valuable experience on how a working design studio works with its clients.

Alongside my studies I have also been operating as a self-employed graphic designer, primarily creating brand identities for start up businesses/campaigns. This saw me working directly with clients, and has aided my transition from student to positioning myself as a working professional.