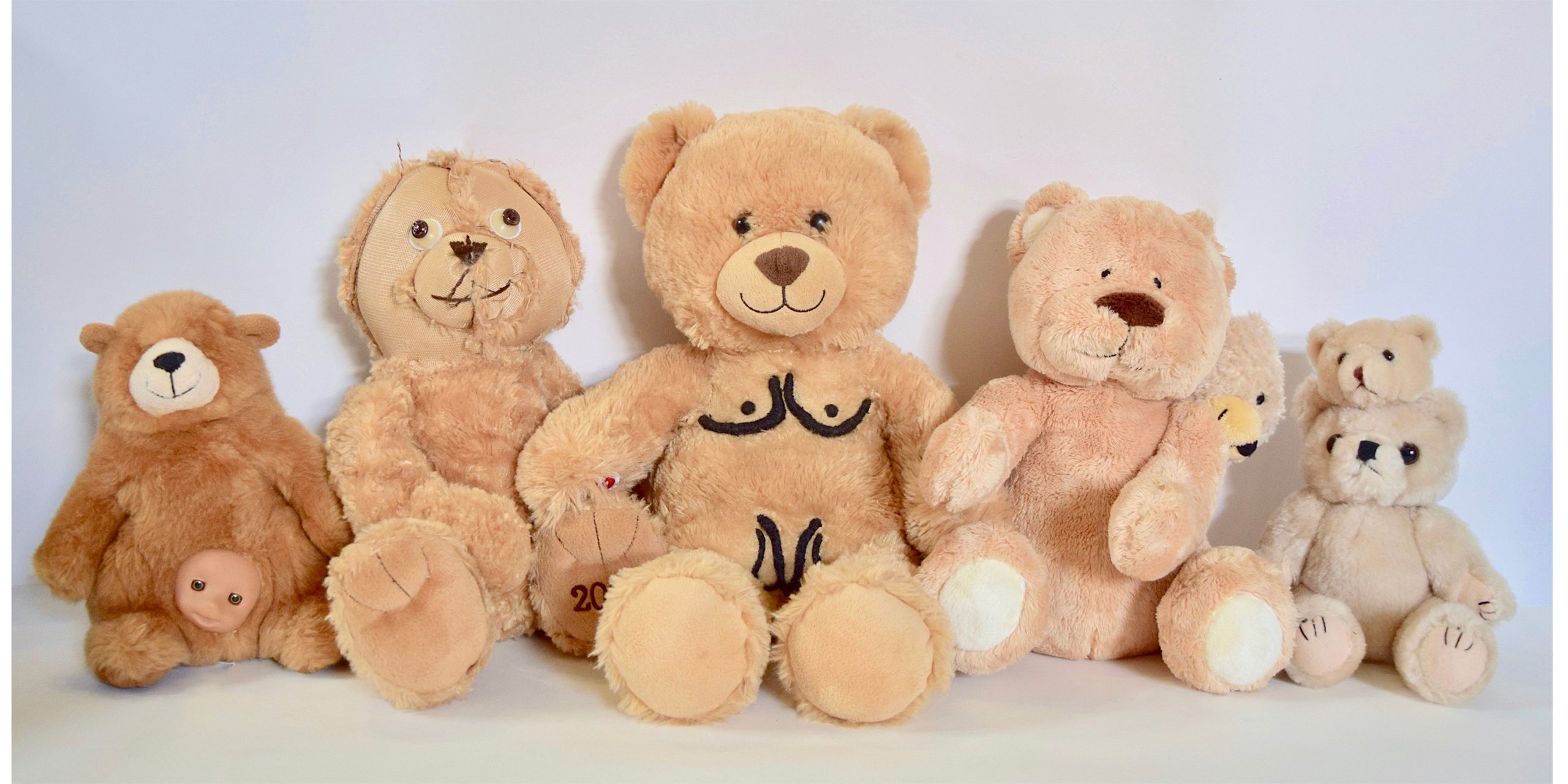 Summary of bears from final project

Here is a selection of distorted bears that I produced throughout my body of work for the Final Project. Each individual exhibits a different approach to my transformation of them. A challenge across this term, was to contort the shape of the bears without entirely concealing their original forms. I achieved this by finding a balance between the unnatural elements I introduced, and retaining a semblance of the features that make teddy bears 'cute' and appealing. 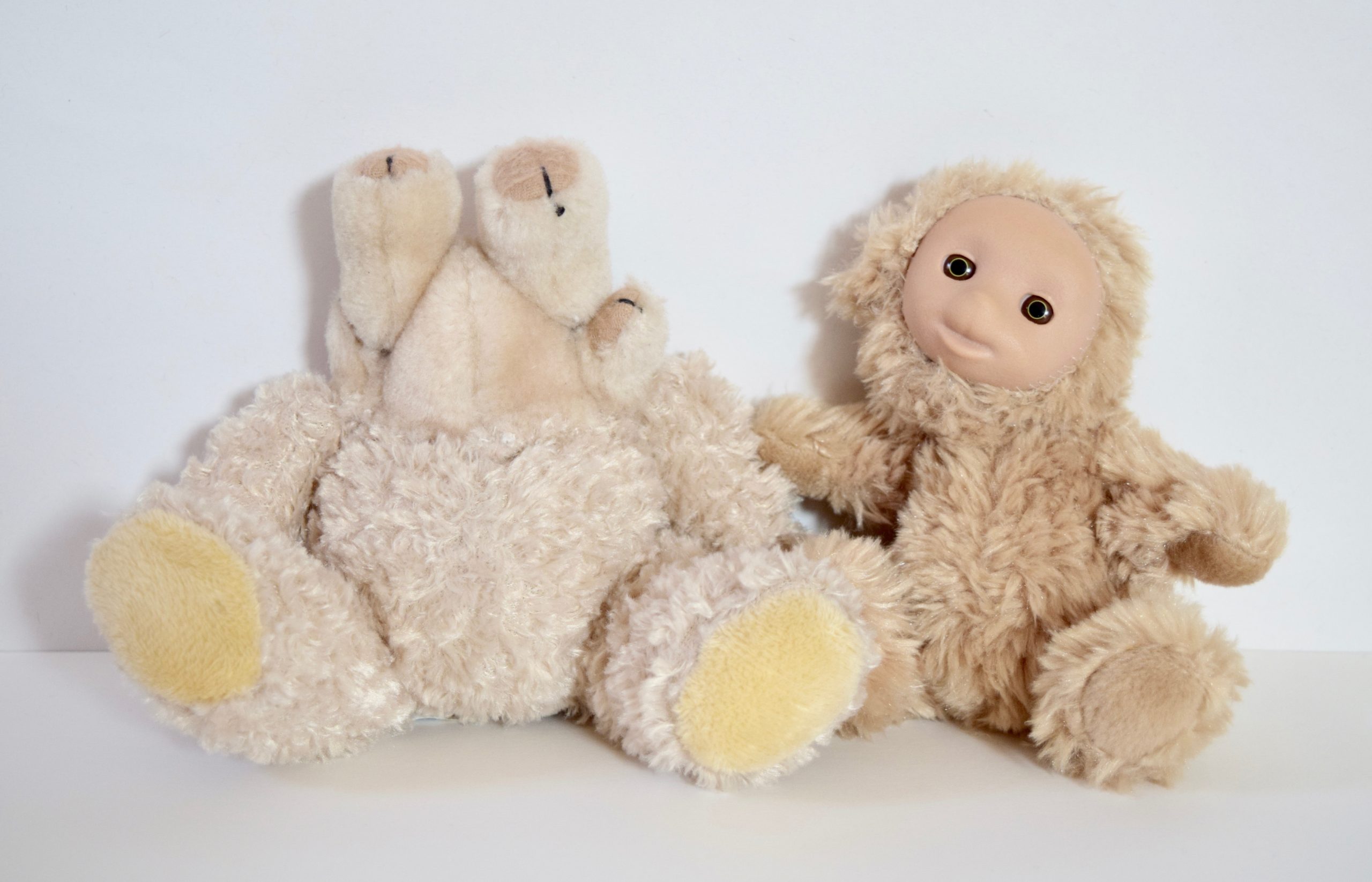 When initially sourcing toys to disfigure, I turned to charity shops. I first manipulated the bears influenced by some initial sketches I completed whilst researching Body Horror, Surrealism, and the Uncanny. At this stage I decided that I would only recycle parts from other toys, and not incorporate foreign objects. I think this kept a coherency across the project, so when I ultimately decided to display all bears together, none looked out of place. 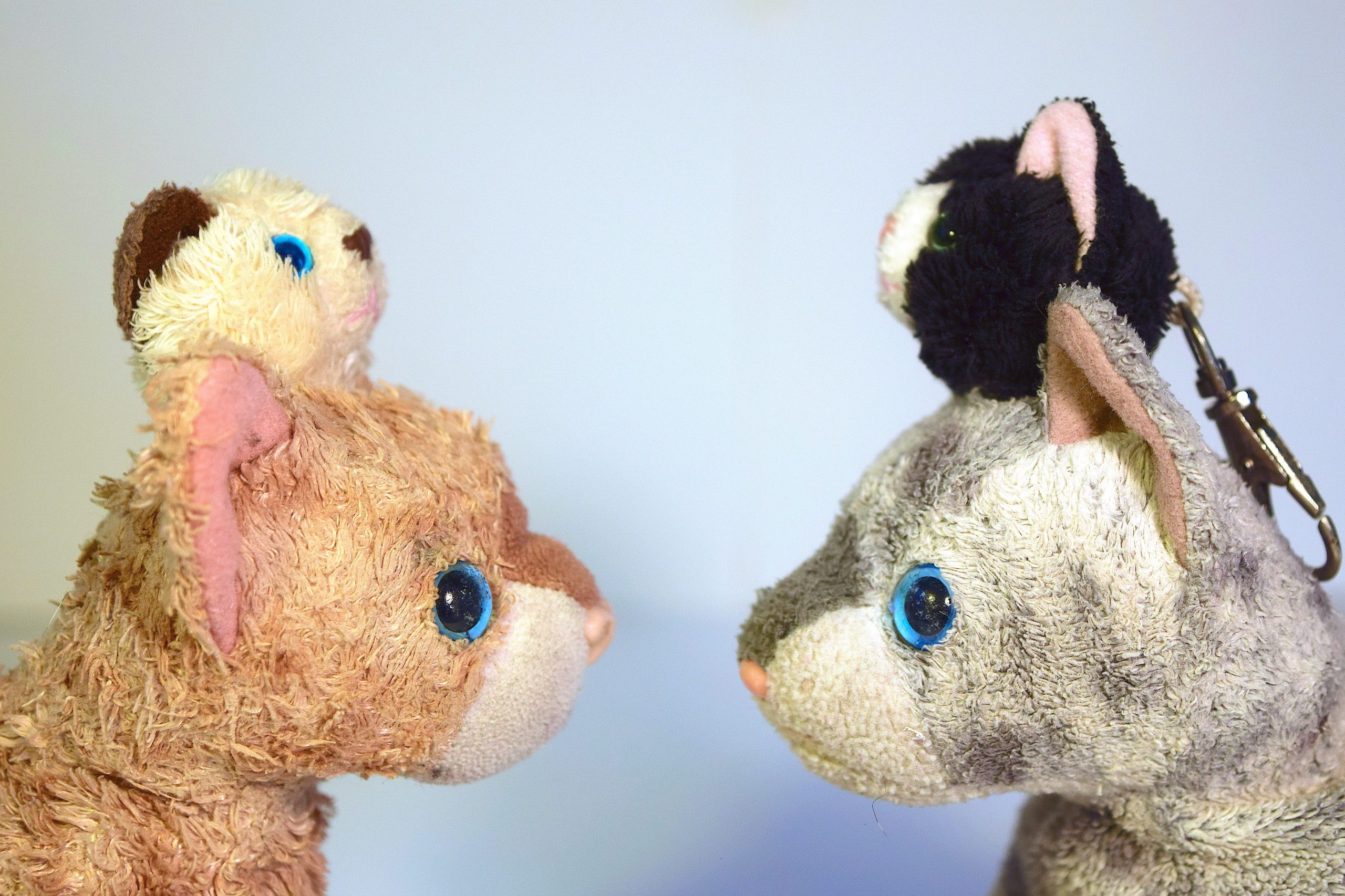 The affect of lockdown

Once lockdown was implemented, I moved from my University accommodation back into my family home. This rendered my resources, particularly in relation to charity shop bears, unattainable. In order to feasibly continue this aspect of my work, I was forced to consider using my own childhood teddies in my work. This progressed my project into vastly more personal territory, and promoted more deliberate decision making. 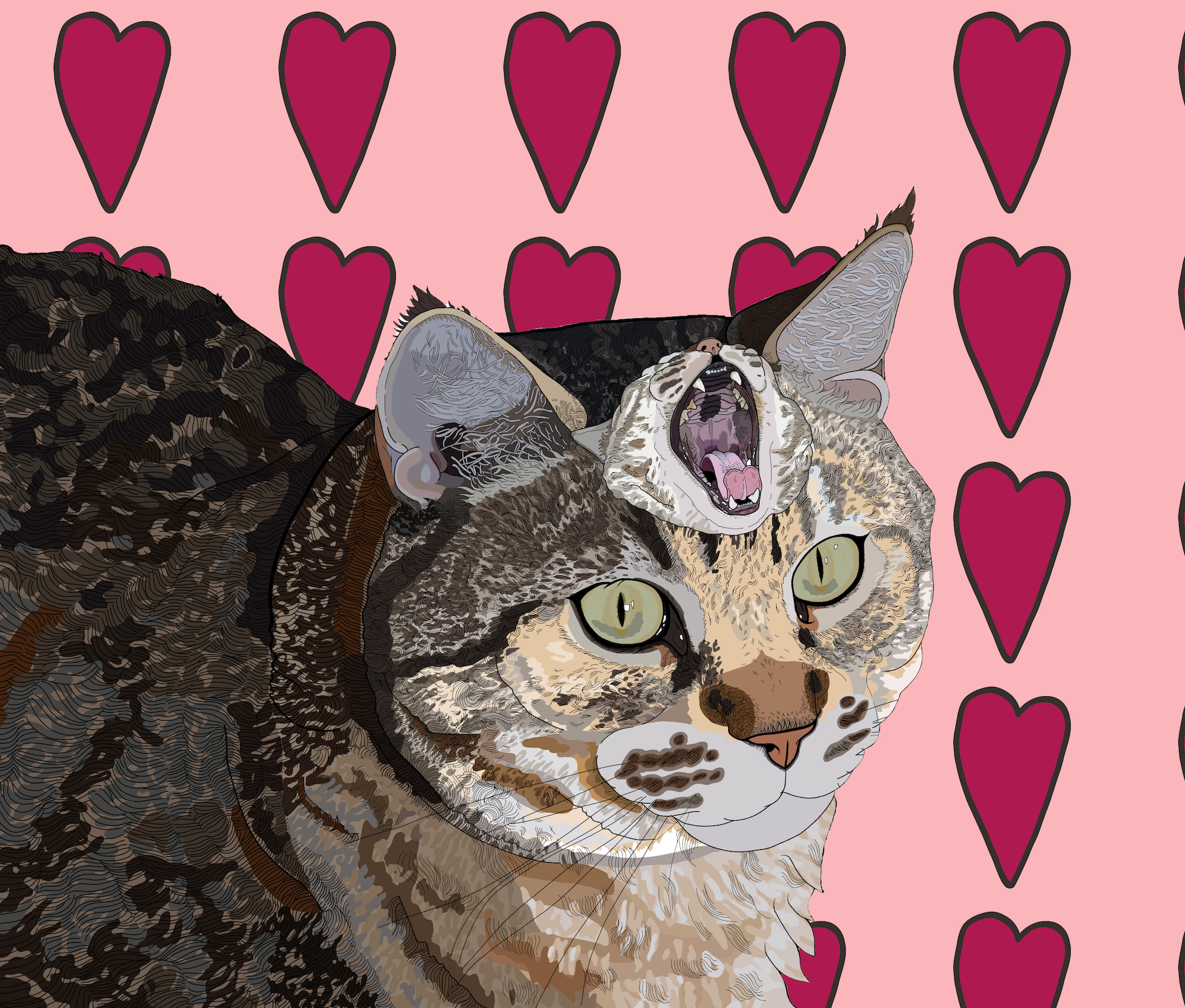 Whilst in lockdown, I also explored the option of digital illustration, now that Photoshop was newly at my disposal. Inspired by some of my initial sketches for the cat toys, I used photoshop to create a series of drawings, using my family cat as reference. This allowed me to play with backgrounds and colour in relation to the foreground subject. 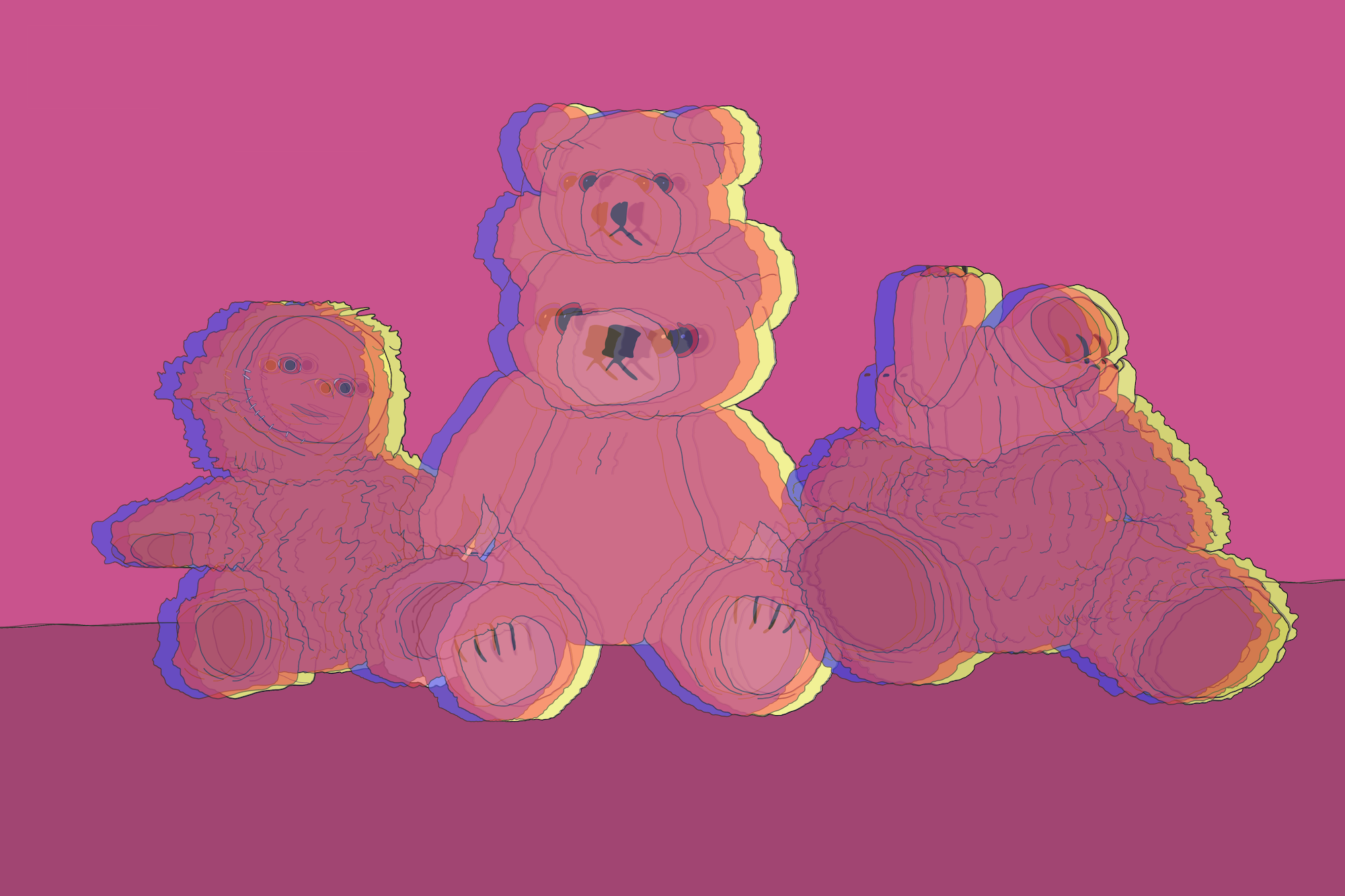 During my exploration into illustration, I also converted some photos of my bear arrangements into a digital format. Using illustration, I experimented with translucency and colour to mimic a sort of 'glitch' affect. 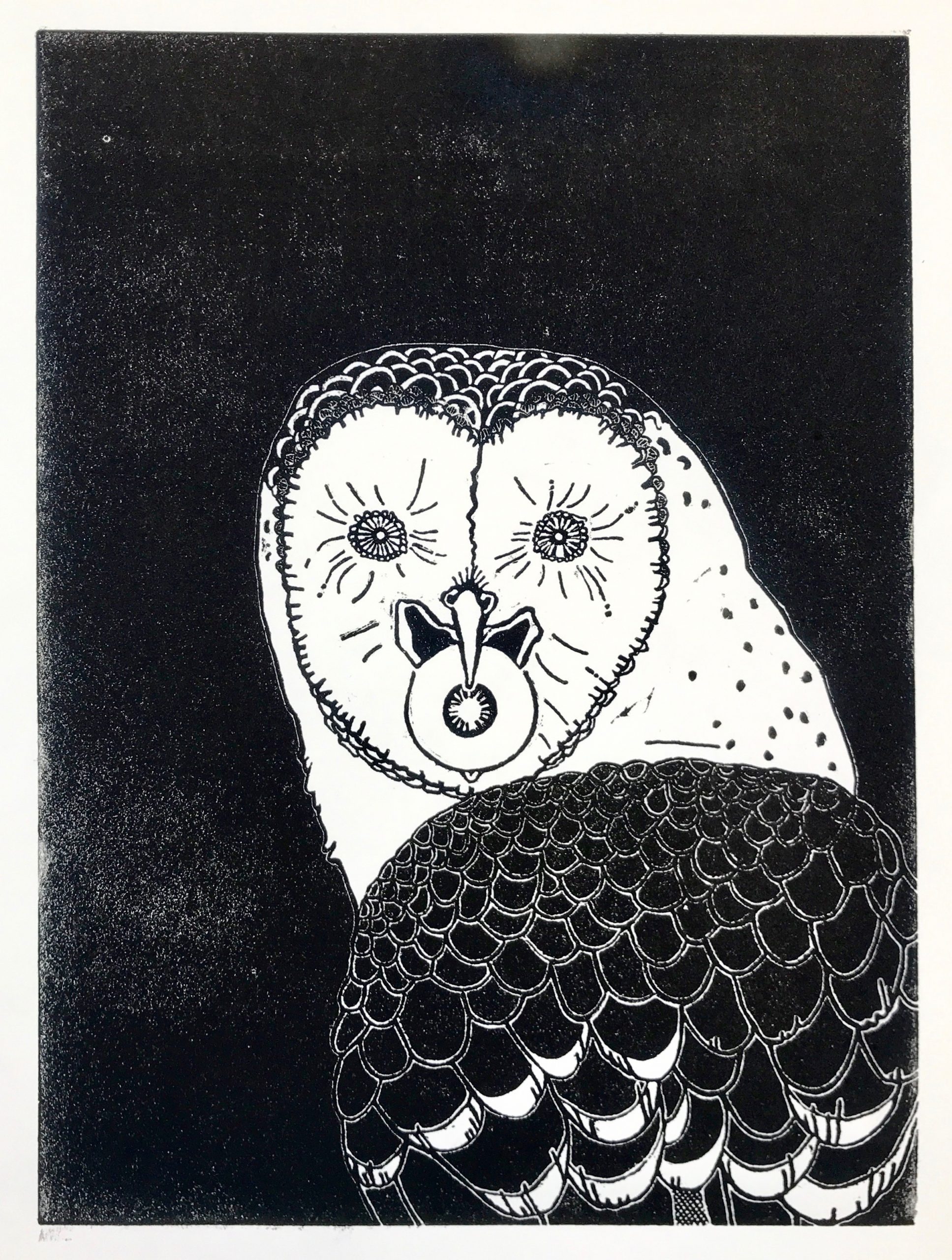 Mankind's relationship to the natural world

I produced this linocut during my second year, when exploring our relationship with, and impact on Mother Nature and her creatures. My interest in print was a takeaway from my practice in the first year, and I refined my technique in order to produce more intricate pieces. 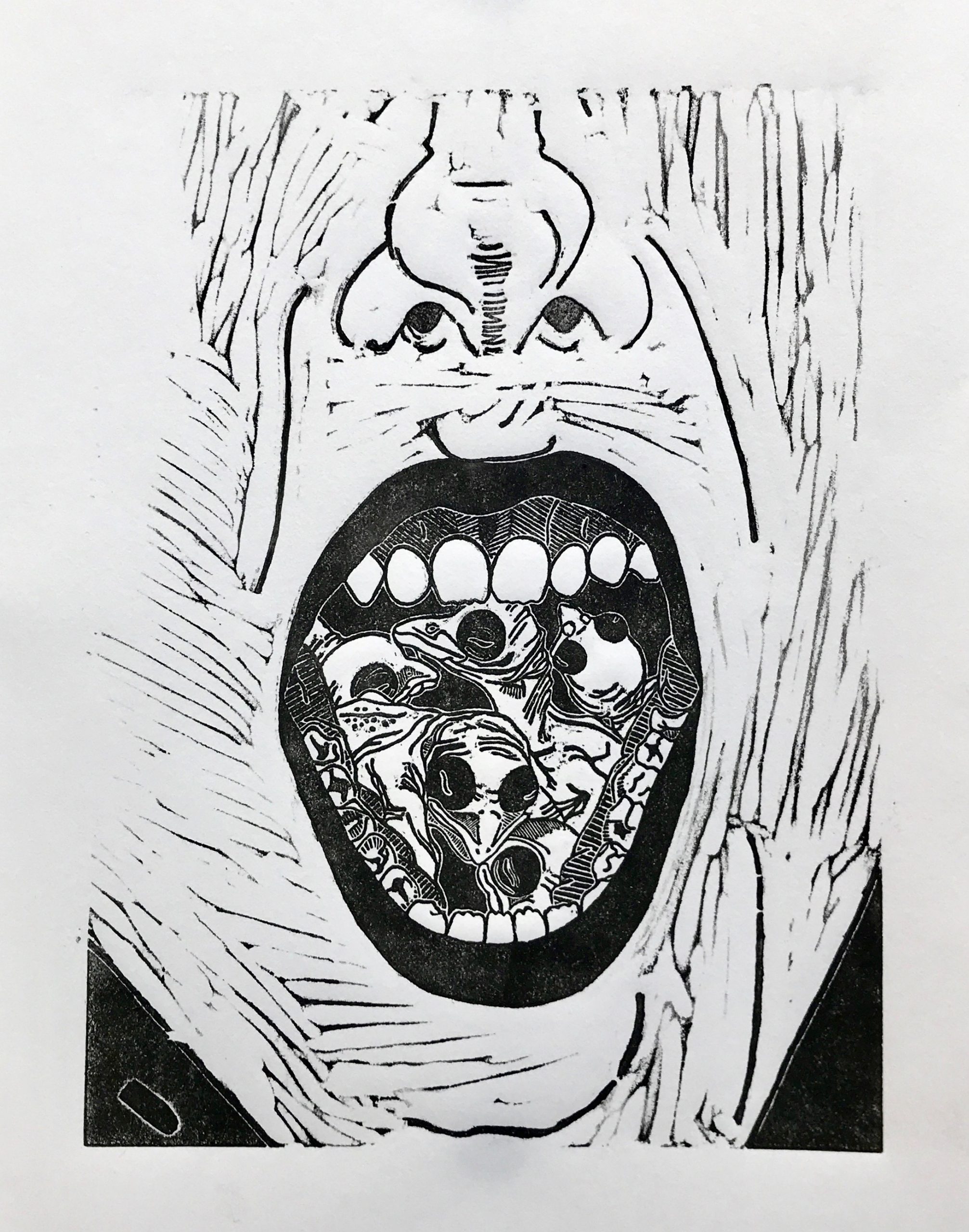 During this project I aimed to push my ability to create as delicate line work as I was capable. I also considered negative space, and how it could be used to affect. These prints were a tedious process, particularly regarding the carving of the lino. However I believe they benefitted from the effort put in. 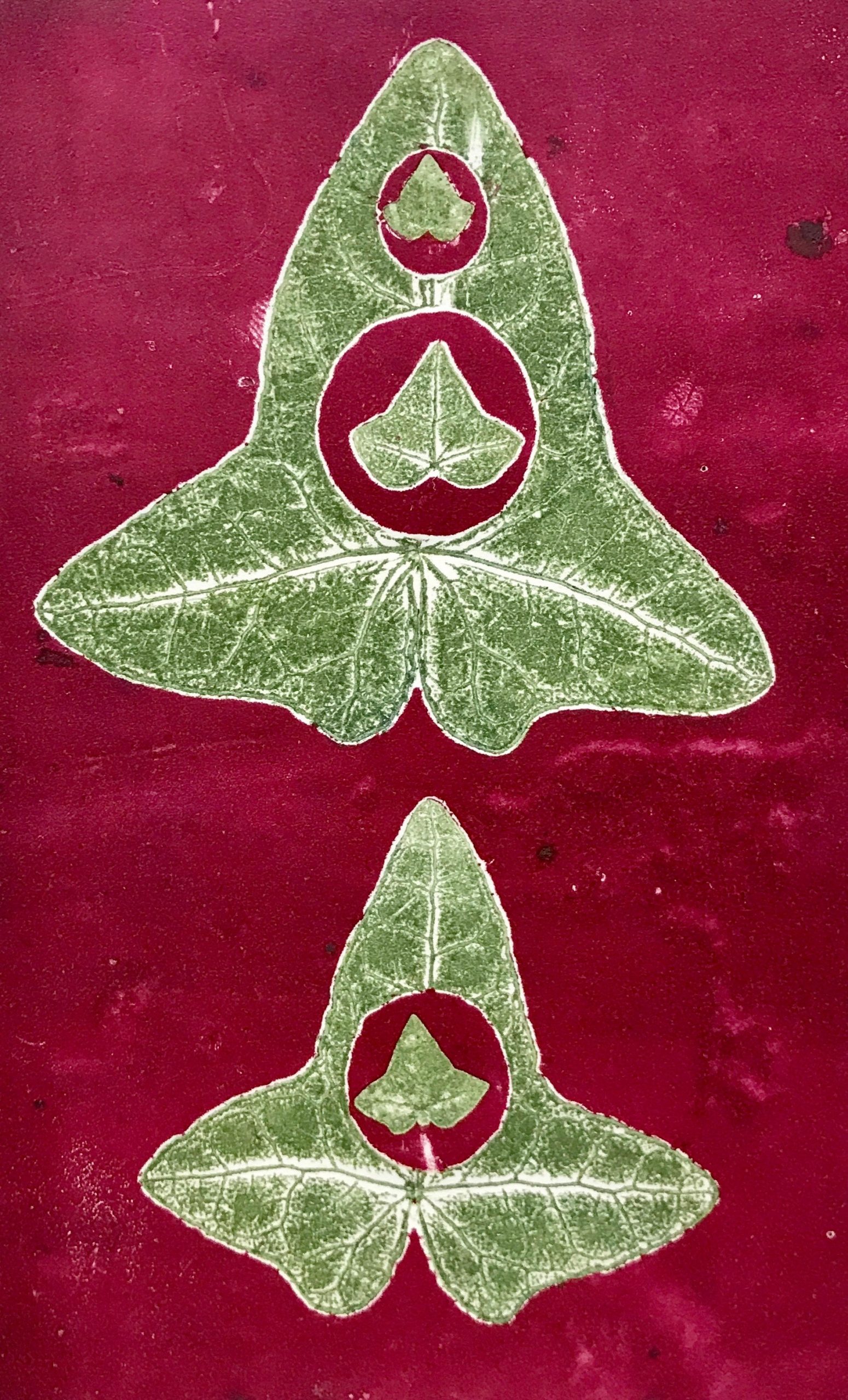 Inspiration from the natural world

This monoprint is a piece produced during my first year. This project dealt with the abstraction and reappropriation of forms found in nature. For this concept I juxtaposed natural forms with hard geometric shapes, to give an artificial look.

My general practice is concerned with the subversion of natural or original forms, and from this what can be implicated about our relationship to the subjects.

During my final project I have used my practice to consider what power our childhood toys have over us, particularly as transition objects. Transition or spacial object are words that describe a security blanket that we adopt during early childhood, often in the form of a toy or other soft, comforting thing.
As a shy child, soft toys were a very significant presence in my own childhood, apparent in my inability to ever actually throw them out.
My concept was that in elevating a teddy into a piece of art, that it would potentially remove their power as a spacial object. Moreover, in doing so I could substantiate my relatively new status as an adult.
My immediate idea of how to transfigure a teddy into something else altogether, was to distort and manipulate their form with the intention of diminishing the very aspects of them that originally induced comfort in those that viewed them.