Behind the scenes: The ugly face of beauty [Read more] 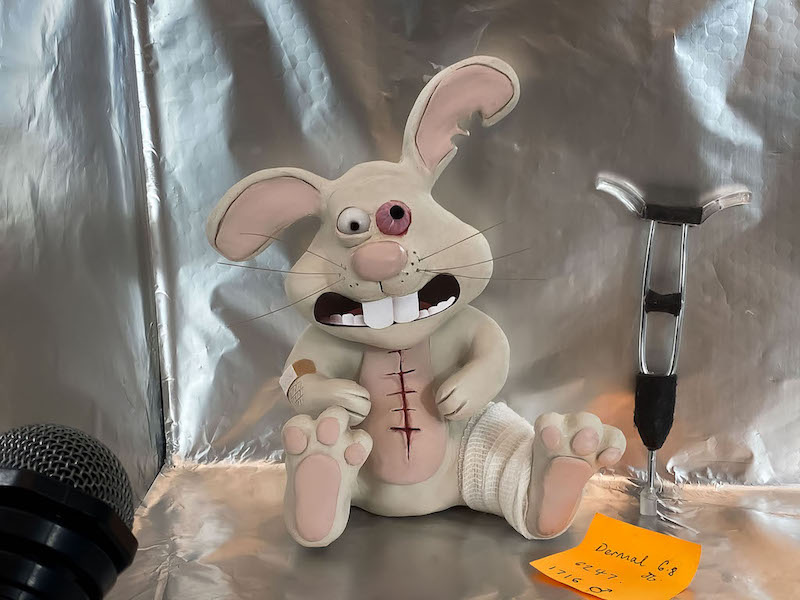 Behind the scenes: The ugly face of beauty - character 1

The image above shows my first character who appears in my final year project, ‘Behind the Scenes: The Ugly Face of Beauty’. This project was a short, animated Stop Motion film, interviewing laboratory animals who have undergone cosmetic testing. The image is of a mentally effected laboratory rabbit who has been subjected to many and varied invasive tests which have gradually made him deranged and frightened.

The project as a whole was a challenge as I was a complete novice and had to learn new skills which included model making, stop motion techniques, script writing and the software required to complete a successful and educational animation. Combing with these I have used my exciting knowledge of photography and photo manipulation through the use of conventional software such as Photoshop. Each scene within the animation consisted of 400-500 different images and required double editing for each image that was taken, which was very time consuming. 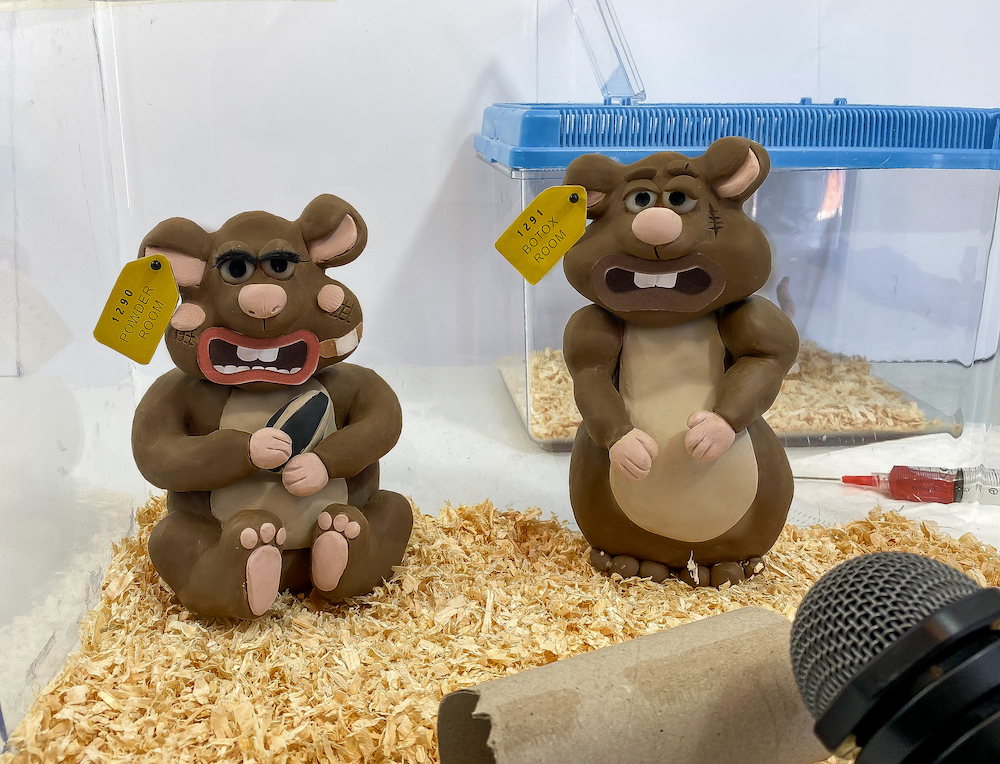 Behind the scenes: The ugly face of beauty - character 2

The image above shows my second set of characters who appear in my final year project, ‘Behind the Scenes: The Ugly Face of Beauty’. 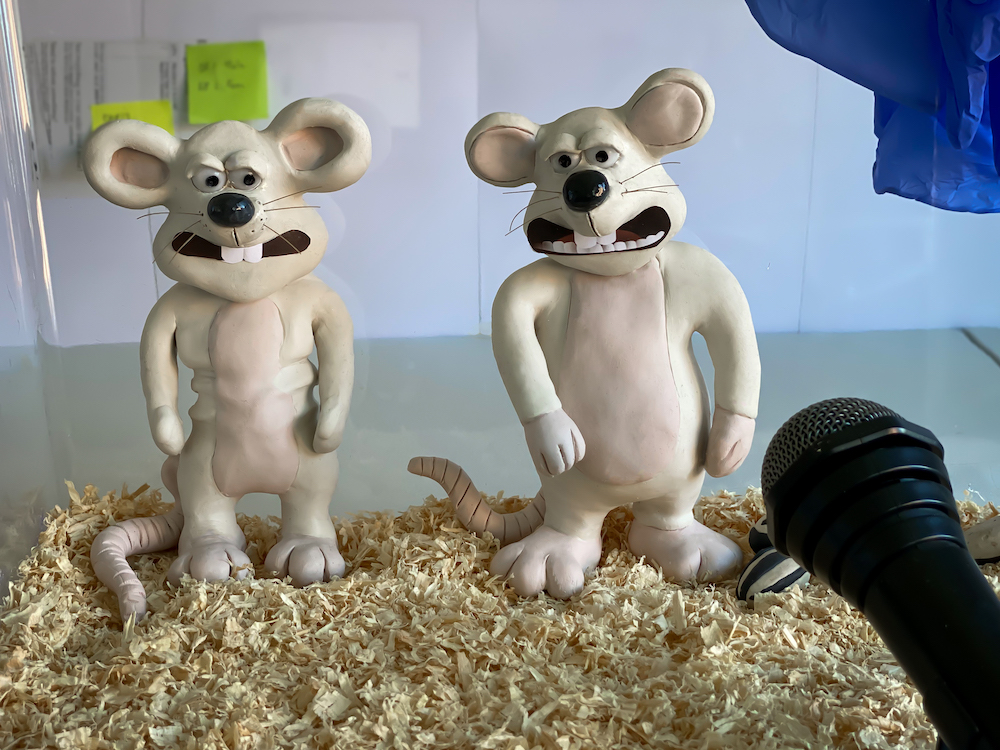 Behind the scenes: The ugly face of beauty - character 3

The image above shows my third set of characters who appear in my final year project, ‘Behind the Scenes: The Ugly Face of Beauty’. 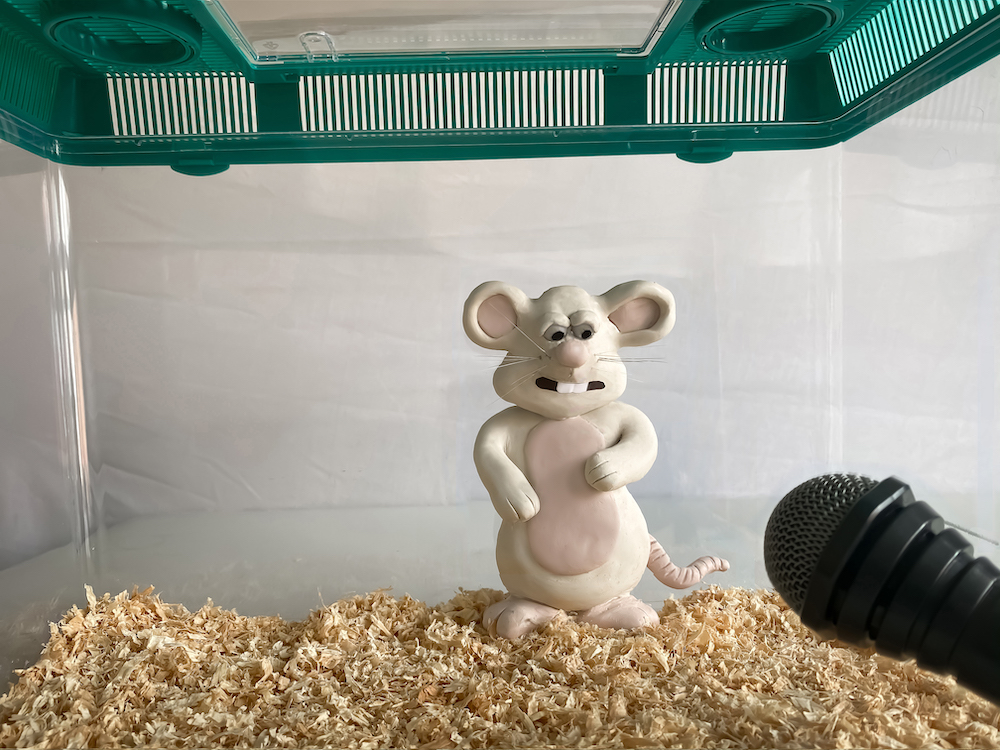 Behind the scenes: The ugly face of beauty - character 4

The image above shows my fourth character who appears in my final year project, ‘Behind the Scenes: The Ugly Face of Beauty’. 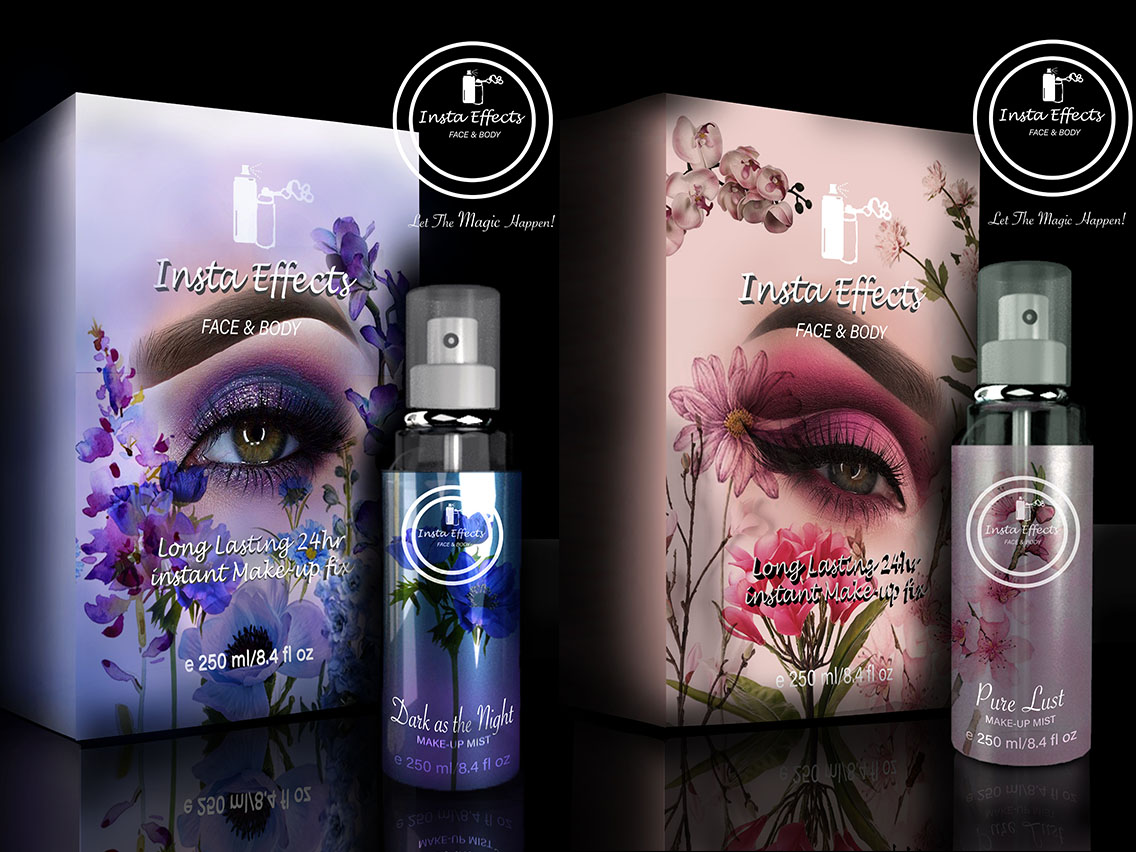 The image above depicts an innovative and imaginative product which was designed by using Adobe Dimension used to create 3D models of the box and bottles. These were then exported into Photoshop where I was able to design the packing and imagery needed to give a visually appealing and effective result.

The project was initially challenging as I was introduced to a new software. However, as the project progressed I got more confident and skilled at using Adobe Dimension and as a result I was able to produce a satisfying outcome once I started developing my work in Photoshop. I selected to this specific item due to my interest in the fashion and cosmetic industry and consequently found it easy to visualise the end result. 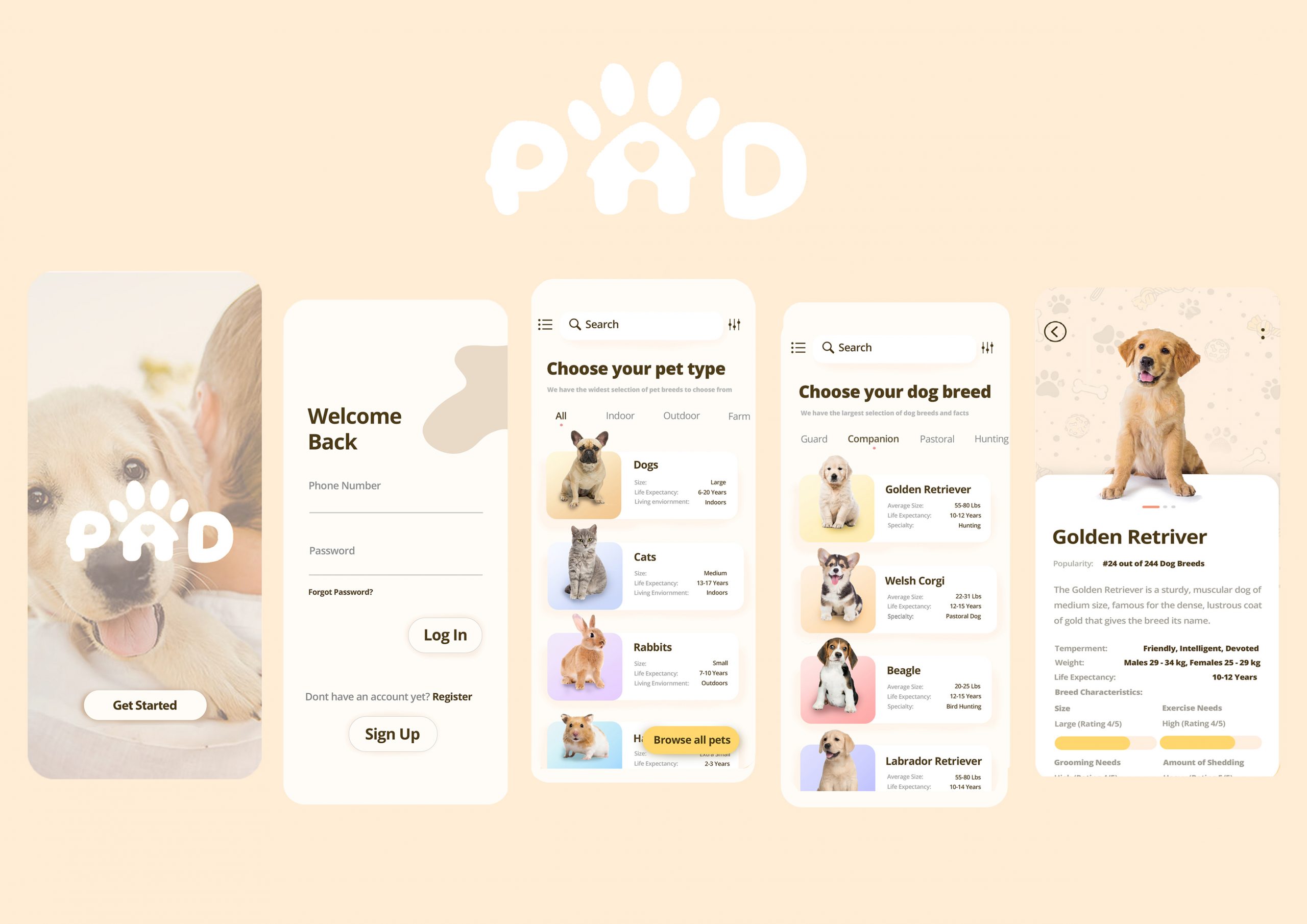 The image above shows the first set of still frames from a UX Pet Adoption app which was created to make the search for the perfect pet as simple as possible for intended user. This was done by using popular features from a particular pet app and combining it with Tinder's technique for finding the perfect match. By doing this I was able to create an efficient, enjoyable and user friendly experience using warm and inviting colours along with a clean and easy to use design. A great deal of thought design work went into the logo. It represents a ‘Heart’ within a ‘Home’ as the ‘A’ of the Name ‘P.A.D.’. The ‘A’ is also a ‘Paw Print’ and ‘P.A.D’ stands for ‘Pet Adoption Directory’.

This project was was interesting and enjoyable to research and develop. My original ideas were similar to existing apps. However, I was able to use my keen eye for presentation, detail and colour to improve the aesthetics of my UX app. I would like to have produced a functioning prototype of my design in order to develop my ideas further, but due to time constraints I was unable to do so. 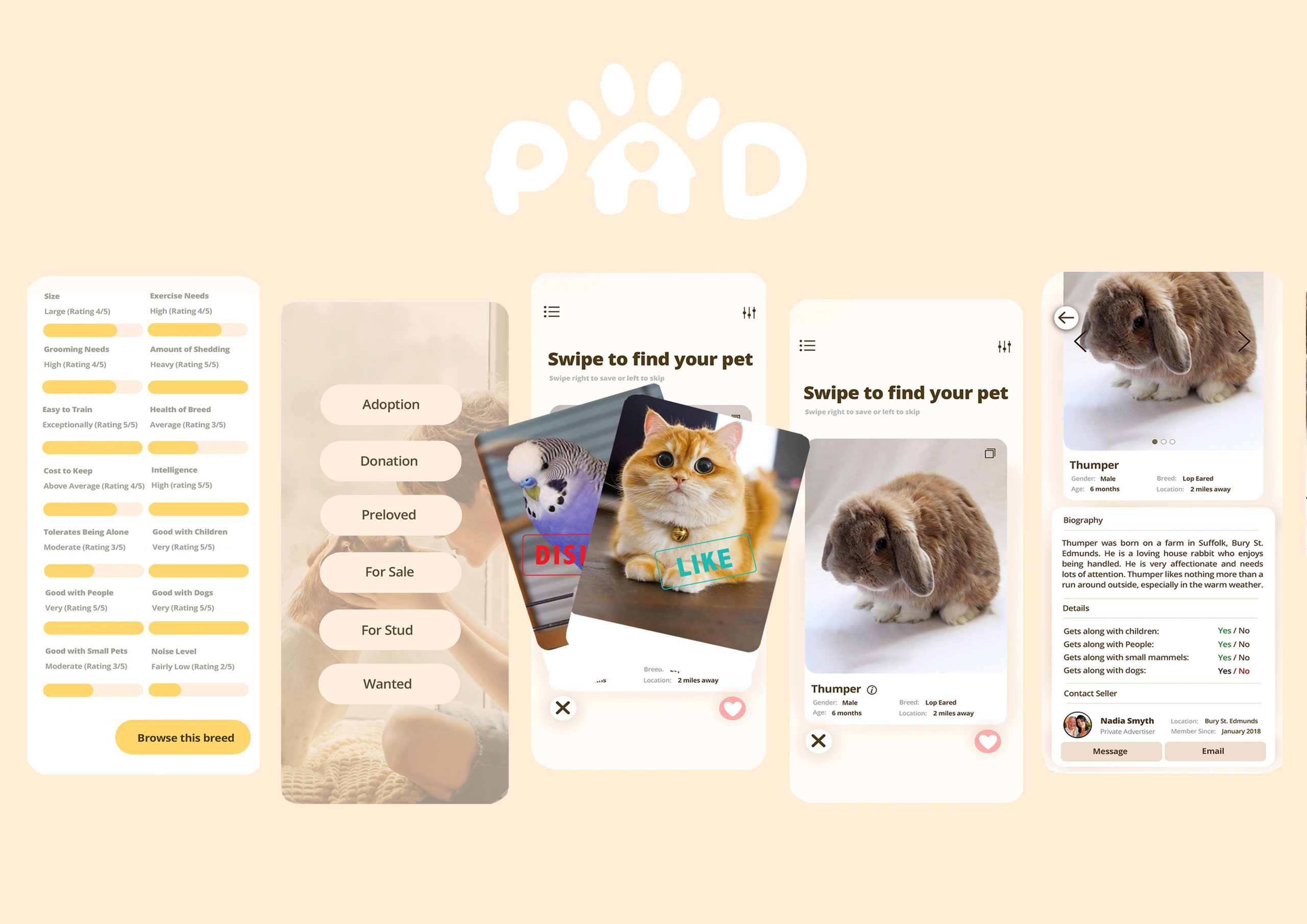 The image above shows the second set of still frames from a UX Pet Adoption app which was created to make the search for the perfect pet as simple as possible for intended user. 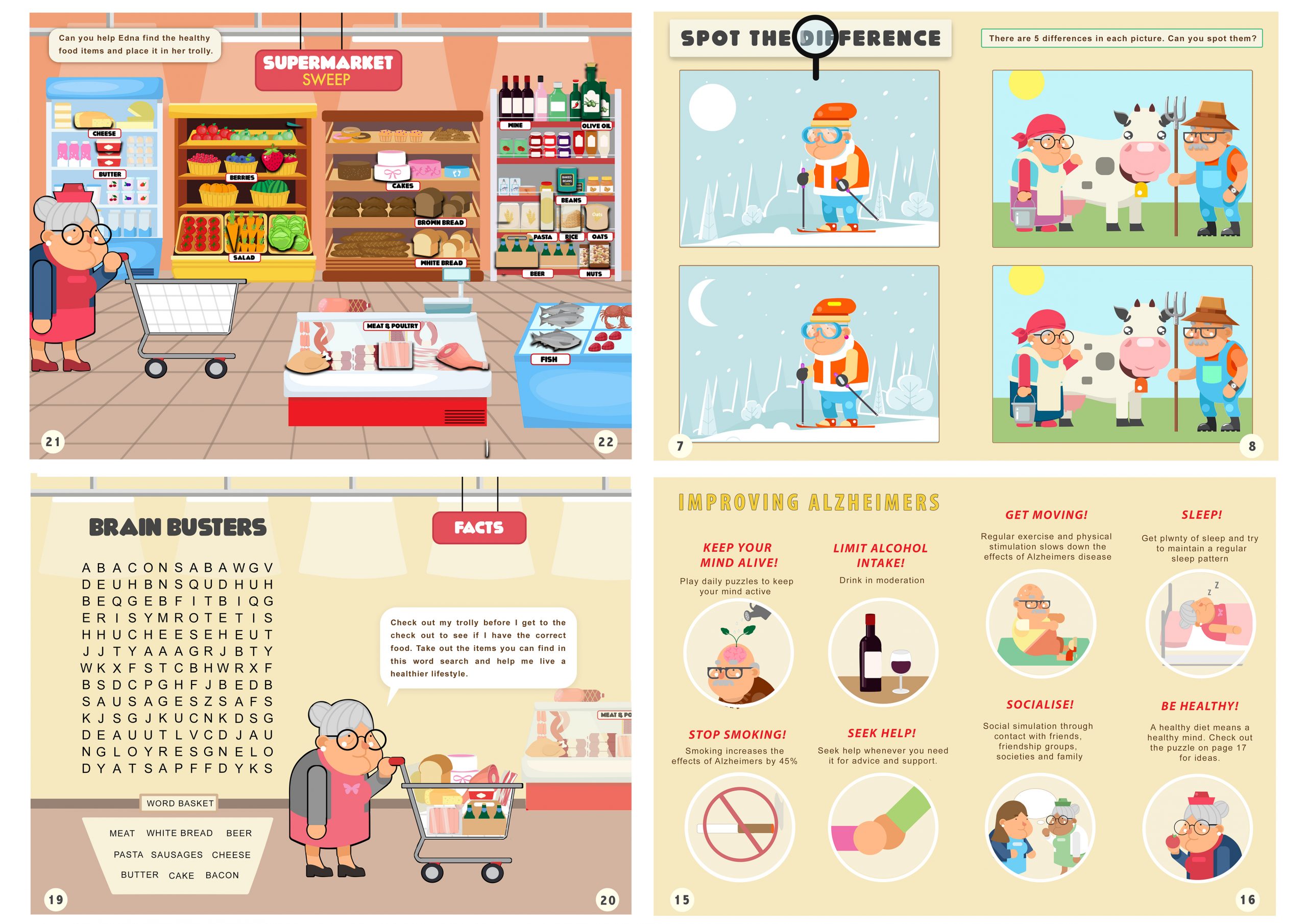 This is an interactive puzzle booklet for people with mild memory problems, particularly those suffering from Alzheimer's and its effects. It’s designed to be both informative and fun and can be used by those with any form of memory impairment, together with families and carers. As you work your way through the booklet, it will help you to identify the signs of Alzheimer's and subsequently through doing puzzles and games will enable you to cope with the management of this disease. This image above shows a few of the selected pages from the booklet.

This project was challenging due to the fact that everything within the book was made out of individual shapes. For example, one object could be made from 10 individual shapes which had to be manipulated and correctly sized to achieve the right result. Therefore this project was very time consuming because of this. Due to my extensive Photoshop skills I was able to produce a high standard of imagery throughout the book resulting in a visually pleasing outcome. My inspiration for designing this book and deciding on this topic came from personal family circumstances and has given me great satisfaction in knowing that I have been able to help others with this debilitating disease.

I have chosen a selection of work that shows the wide variety of skills which I have learnt and developed over my time at university and how I have put these skills into practice.

Overview of Final Year Project Brief
Description:
In my final year project I produced a short, animated stop motion film, interviewing laboratory animals who have undergone cosmetic testing. This looked at the experimentation from their perspective. In this animation, the animals convey their feelings and thoughts whilst discussing the atmosphere of the lab and the various tests which they are subjected to. The animals also highlighted how they differ from humans and their perceived usefulness as laboratory subjects.
Aim/Objectives:
The aim of this short film is to raise awareness of animal testing in laboratories by giving the viewer an insight into the events and tests which take place behind closed doors in the name of the cosmetic industry. The purpose of this short film enables animals such as, mice, rabbits and hamsters to have a voice. By portraying the animals in this way, I have highlighted an emotive and sensitive subject using dark humour which is funny, but sad at the same time. By using Plasticine to animate my characters it eliminates the brutal graphic reality of using live subjects and makes it more appropriate and easier to watch for young and old, therefore raising awareness to a wider audience.
Audience:
While the primary aim of this project is to raise awareness, it could also to be used as an educational tool which is memorable and informative to the younger audience without being shocking or disturbing. The film is aimed at society as a whole, many of whom are blissfully unaware of the treatment of animals and how they are sacrificed for human aesthetic enhancement. It not only highlights the cosmetic industry practices but also raises awareness of animal cruelty.

Skills and Strengths:
Throughout my final year project I have learnt many new skills. These include the following:
- How to develop an idea into a creative and imaginative end product aimed at a specific target audience.
- Research of Stop Motion as a subject including ideas for the development of characters.
- Creating humorous, poignant and informative scripts.
- Building wire frame armatures using aluminium wire and epoxy putty.
- How to use new materials, such as Newplast Modelling Clay and the tools required to sculpt the models.
- Creation of moving body parts such as arms, mouths, ears, eyes and eyelids.
- Sculpting techniques.
- Prop and set development.
- Learning how to lip-sync following my own unique technique for reference when filming and the various mouth pieces required.
- The importance of lighting and the use of correct equipment when filming in order to create a constant and successful Stop Motion.
- Developing existing software skills using Photoshop and Lightroom.
- Learning new softwares and the skills needed to use for editing in Final Cut Pro X and Adobe After Effects which was used for the introduction .

During my time at Loughborough University I have learnt and developed many skills some of which I have become very proficient in such as InDesign, Illustrator and particularly Photoshop.

Career Aims
Throughout my time at university I have always had an interest in the fashion and cosmetic industry as this area has always motivated me both personally and work wise. Through the various projects that I have undertaken I have realised that I have skills in other areas that I have never even considered. For example, my most recent project on Stop Motion animation is something I have not considered previously due to my lack of knowledge of this film making technique. However, it has been a big learning curve for me over the last few months and something I hope to be able to explore more moving forward in my career. This also shows me that I am capable of learning new skills and techniques, am very adaptable and able to respond to any challenge.

Behind the scenes: The ugly face of beauty