This image is the cover image for the video I created to explain my idea and solution for the D&AD Penguin Brief: Enhance the reading experience.
My idea proposed combining the QR codes, barcodes, augmented reality and any other type of code that is used to expand the visuals or knowledge about a certain product. Printing the codes onto the pages of the book would allow people to take a break from reading and recharge a little bit. It also includes using a phone, which people are unable to not look at for long periods of time.
The codes may contain any information, the publisher deems worthy. In the video, I took 3 examples: cookery books, fiction and non-fiction books. Each of them was slightly different.
Fiction book, originally written in Italian, had QR codes containing audio chapters in both languages (Italian and English). Knowing from personal experience, constant reading tends to bore me after a certain point, but having audio chapters can help people take their eyes off the book, relax and then continue reading further. This can speed up the process too.
Cookery books have a range of additional digital information they can give the reader, from video lessons to digital grocery lists. In the video, I took an example of a grocery list that was used later on to buy the necessary ingredients.
The non-fiction book, related to music had codes with all the musical compositions mentioned in the upcoming chapter, so the reader is able to experience the music that was examined in the chapter. Non-fiction allows a range of information used, speeches could be placed as audio files in history books, making it easier for the audience to understand and gain knowledge.

The challenge in this project was to create the codes themselves in a short period of time given. I have experimented with different types: barcodes, augmented reality and QR codes. The QR codes were the easiest to create and use on the phone, so the video contains primarily them to pass on the idea of the project.

Created as a response to the Penguin Fiction Book cover design competition.
"The Night Manager" is a spy novel, however, it differs from other books in that genre.
The brief asked us to step away from the common designs of spy books and be as creative as possible. Taking creative risks.
My design was based on the book's networking and details that I thought were important. The tree branches are taken as inspiration from the Protagonist's name: Jonathan Pine and later Andrew Birch. Their position and look are determined by his desire: revenge the breath of his love. Sophie appears throughout the book and as memory or his conscious. Therefore, the brunches are positioned as if they were in a bouquet, but there are no leaves, which was intended to signify death (along with the blood smudge). The background pattern signifies the tree rings and eyes are put there to add the effect of uneasiness and mystery. 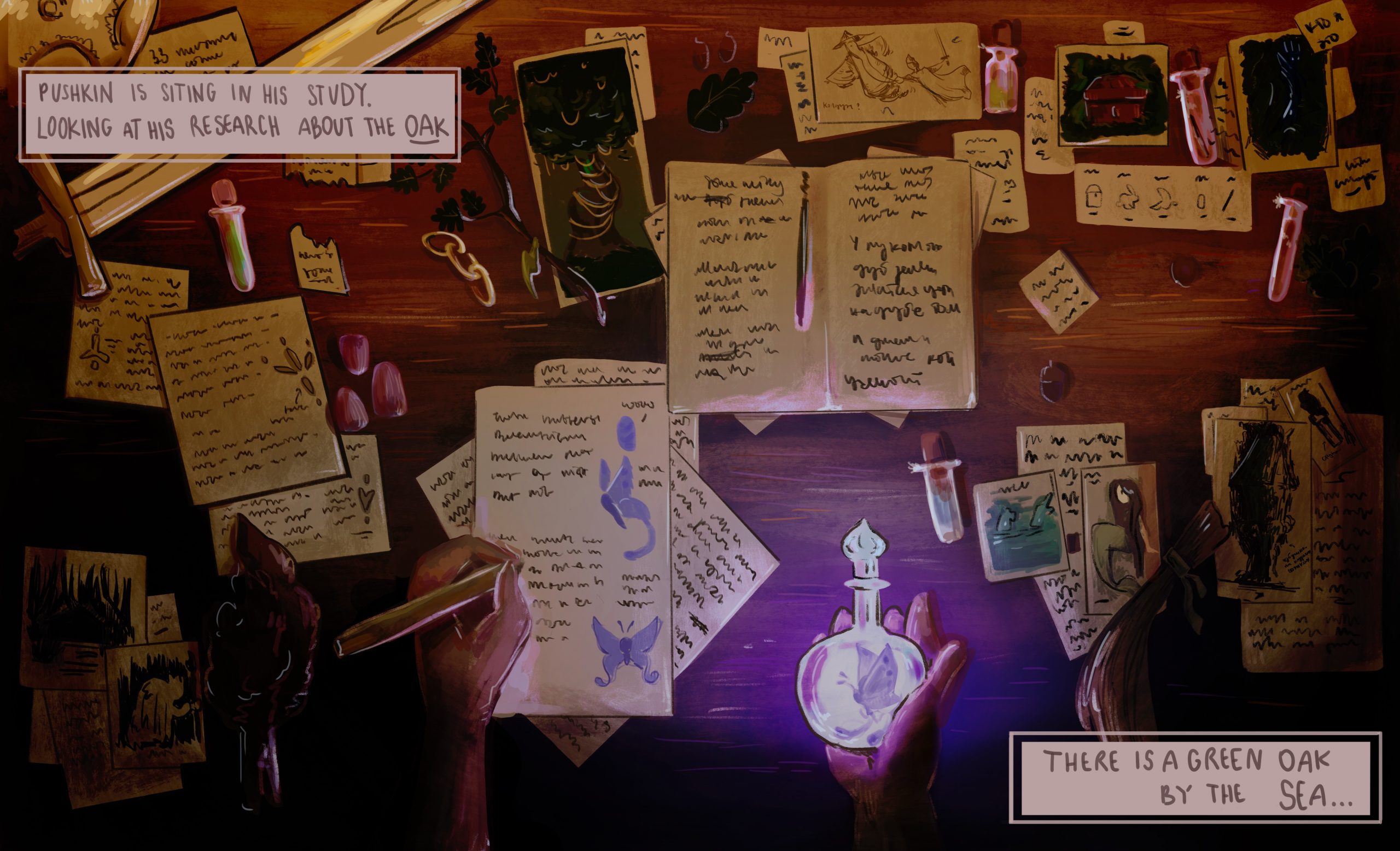 This is inspired by the Russian verse "Oak by the Sea" written by Pushkin and is the most popular verse in Russia. Even though it's popular and everyone knows it, it doesn't have a lot of drawing and artistic representations, especially in the modern world. The drawings normally are intended for children and I thought it would be an interesting challenge to transform this verse/poem that was intended and learned by children into something more fantastical, for an older audience.
This project is also made with moving image in mind and is intended to imitate the art and illustration that goes into creating film visuals and game art.
The poem is very short, but there are a lot of significant details and characters that are commonly used in Russian folklore and stories. Creating one visual with those elements seemed like a challenging task; however, I quickly realised that the audience may or may not know the poem, and it's elements (as they are not only Russian but English speaking as well.) This led to creating a one colour drawing, which is the ending spread of the graphic novel, which is telling the story/ poem. All the images and elements that appear throughout the short graphic novel appear in the final, colour spread.

I am passionate about filmmaking and stories. Each piece has to have a story.

I deal with stories and different ways they can be told. Primarily through sequential imagery- video and graphic novel. My work consists of elements that are not considered normal and are different. I try to show the crazy and odd side of me because it is always much more fun to explore and create something that seems normal, yet there is something special about it, whether it's through the concept or through colour.
I want to continue telling and showing the stories through moving image and go into the film industry.

Adaptation and mediation of Conan Doyle's Sherlock Holmes stories in the Soviet Union (1979), the United States (2009) and the United Kingdom (2010)

Digital frontier; 'The Night Manager'; 'Oak by the Sea'

March '19 - First place in Designathon. Given by Loughborough University Engineering society. Our team came up and described the best solution that was applied to the hypothetical/ imagined town with real-life problems (poverty, floods, business)